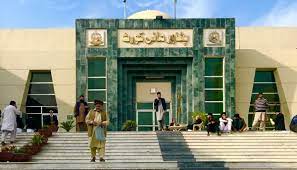 Additional Prosecutor General Muhammad Ali informed that he along with DFO Tariq Shah will visit Chitral after submission of report by committee constituted for probe cutting of trees and excavation of minerals in the district who worked from 5 to 14 December to identified further gray areas in this regard.

In the meantime, Chief Justice PHC Qaiser Rashid ordered Additional Prosecutor General along with DFO for immediate visit to Chitral after obtaining report because delivery of services will disturb following snowfall season. Muhammad Ali Advocate informed that famous walnut forests were grounded which is neglected while CJ PHC inquired from Ali Gohar Advocate regarding his visit to Panj Terat temple on court’s order.

Ali Gohar Advocate informed that unfortunately Panj Terat temple is dump of garbage despite it is the jurisdiction of Evacuee Property Board and all pathways are filled with dirt and dust.

He added that pictures didn’t place on court’s record because it will defame us.

However, Chief Justice Qaiser Rashid remarked that we are surrounded by mafias. Because on one hand land mafia on other hand timber mafia are actives while added that in Evacuee Property Board has zero performance because didn’t utilized 36 thousand Kanal land provided in Takhtbhai area of Mardan district.

Chief Justice Qaiser Rashid observed that we people didn’t have any sense of responsibility for national resources and added that Panj Terat temple was famous internationally but unfortunately it become dump of garbage as per submitted report while cut centuries old trees in Chitral by timber mafia.

Chief Justice PHC Qaiser Rashid added that these are important issues and demands early hearing while adjourned further hearing and ordered Evacuee Property Board Khyber Pakhtunkhwa’s chief to appear to today before court.