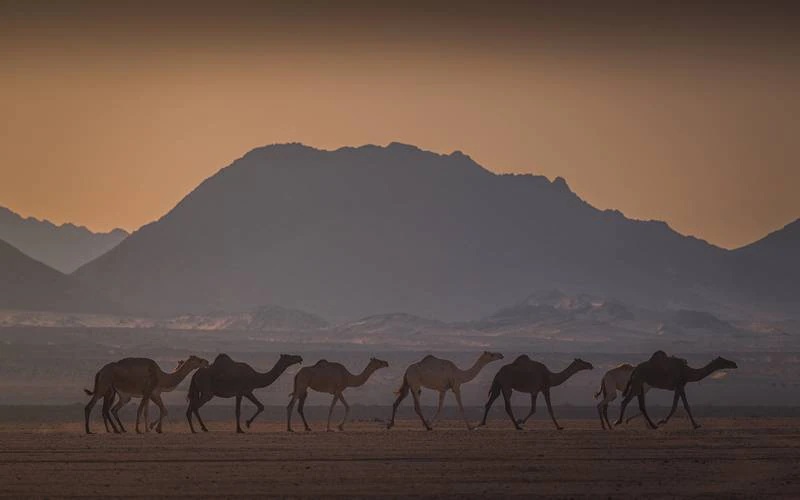 In a photograph by Riyadh Al Malahi, one of three winners of the inaugural Kingdom Photography Discovery Competition, a caravan of camels walks in perfect assembly across flat sands. Behind the herd, the mountains of Al Wajh loom in silhouettes.

The camel humps, with their dips and rises, echo the rocky landscape. The image accentuates this resemblance with its parallel composition, transforming the dromedaries into a roving mountain range and visually resounding the relationship between the animals and their environment.

The grant winners were commissioned to create a professional photographic archive of Al Wajh.

They also joined a distinguished roster of judges who evaluated the final submissions for the Kingdom Photography Discovery Competition, which was open to early and mid-career photographers from Saudi Arabia.

Launched by the Visual Arts Commission of Saudi Arabia’s Ministry of Culture, the $106,000 award is the first annual photography competition of its kind to be held in the country. For its first year, the award is focusing on Al Wajh, an area along the coast of the Red Sea in the north-west of Saudi Arabia. The award comprises three categories: underwater, nature along the coast and urban environment.

The competition had 450 entries from across 14 countries before the judging panel shortlisted 17 photographers who took part in the photography expeditions to Al Wajh Governorate and the Red Sea coast.

“It is a very unique event,” says Moath Alofi, the Kingdom Photography Award judge and exhibition curator. “It breaks the usual thinking of what a photography competition can be. It was an explorative journey. The photographers learned from each other. They created an interesting dynamic. It was all about exploring new techniques and new destinations.

“We had the grants for the professionals and a prize for emerging names,” he says. “The grant winners went with the competition participants [on the expedition]. They also held workshops. It was all about building bridges.”

The exhibition opens with the underwater category. The section showcases works by Alex Dawson, a scuba diver and photographer who lives in Stockholm and who won the grant for underwater photography.

Dawson’s work is displayed alongside photographs by Osama Abusunnon, who won the the underwater section category prize. Abusunnon has been a diver since 2009. With more than 3,000 dives to his record, the Red Sea is his main focus. After diving for more than a decade, Abusunnon began taking photographs of the diversity of the coral and marine life as a resource for those interested in the environment of the Red Sea.

The photographs on display take viewers to the luminous and polychrome bedrock of the Red Sea, featuring colourful marine life as well as shipwrecks that have been swathed with barnacles. Sunlight splays from the overhead water surface in golden threads. Colourful schools of fish swarm boulders, sifting through the underwater vegetation.

The exhibition then emerges from the Red Sea to highlight the natural environment along the coast. Art photographer Andrea Alkalay, who lives in Buenos Aires, won the grant in the coastal photography category. Her work features triptych and diptych landscape photographs of the Ral Mountain region and documents the unusual geological rock formations of the area, drawing attention to their archaeological, anthropological and geological significance.

“Although the art of seeing is frequently used to describe photography, humans create perceptions and thus connections with the land through all our senses, not just sight,” Alkalay said. “To see these landscapes is to try to understand the mechanism that produces them, to decipher how they have evolved.”

Al Malahi, meanwhile, was named the winner of the category’s Discovery Competition.

A pharmacist by trade, Al Malahi began his photographic practice in 2015, using his smartphone to capture images before moving on to more professional equipment. Landscape photography is his primary focus.

“The competition gives you a different perspective of what a coast can look like,” Alofi says. “There are mountains, a landscape different than the coastlines that generally come to mind.”

The exhibition’s final section showcases the urban environment of Al Wajh. Australian photographer Nyree Cox received the grant in this category, whereas Mohamed Lahi was chosen as the Discovery Competition winner.

The photographs in this category reveal the architectural beauty of Al Wajh. These include old buildings with magnificent wooden oriels, windows with wooden doors painted blue and minarets with unique pencil-tip tops.

One photograph that particularly catches the eye and which is one of the first in the section is by Lahi. It shows three barred windows with green wooden doors that have been weathered and chipped. Their wood grains are deep, and along with the grainy surface of the concrete and stone walls, give a dynamism and multi-textural feel to the photograph. The colours, too, are vivid and electric and, at first glance, make the photograph come across as an oil painting.

While the first year of the competition is focused on Al Wajh, Alofi says it is only the beginning, with each year exploring a new aspect of Saudi Arabia’s culture and natural environment.

“This is just the start,” he says. “Al Wajh means face, and the first year started by showing the face of this area in essence. That being said, that doesn’t mean the rest of the areas will not be covered. This is just the first step. The competition will be taken to a different level the next time it happens. It was an explorative initiative and it brought locals and internationals together, the established and the emerging together.”

“We are excited to be hosting the inaugural exhibition at Hayy Jameel, showcasing works from the local and international talent who took part in this competition. We look forward to future editions of the Kingdom Photography Award and to welcoming new and additional participation from the incredible pool of talented photographers from Saudi Arabia and around the world.”