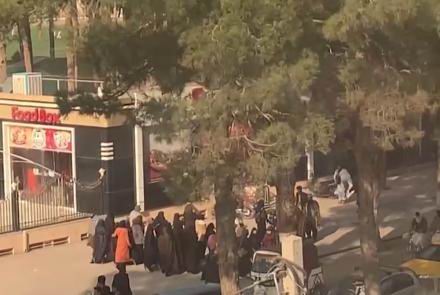 HERAT (TOLOnews): Following continued reactions to the ban on university for women, several female students in Herat province took to the streets to protest the closure of universities for women.
Protesting women criticized the Islamic Emirate’s decision and said they will not stop studying. “We only want our right. Is it stated in Islam that we should not educate?” asked a protester.
Meanwhile, the US special envoy for Afghanistan Thomas West asked the Islamic Emirate to open the universities to female students. “The whole world is witnessing Afghan unity in opposition to a damaging and indefensible decision. Students standing shoulder-to-shoulder with their sisters, resignations, protests, dissent. We urge the Taliban to listen to their people. Not too late,” West tweeted.
“I would want to make this request to the Islamic Emirate to provide the opportunity of education for women in universities,” said Mawlawi Abdul Hamid, Imam of the Sunnah of Zahedan.
Malala Yousafzai, a Pakistani activist and Nobel Peace Prize winner, expressed her concerns over the Islamic Emirate’s decision to ban Afghan women from attending universities.
“There is no religious or cultural justification for their actions. The restrictions on women are hypocritical and unIslamic,” she said.
“I’m devastated that the Taliban announced a ban on university education for Afghan women. This week, women were not allowed to enter their classrooms. Female teachers were sent home from their jobs. The Taliban have already banned girls from secondary education for a year and half,” Malala added.
“In higher education, they should create an advisory board to make the decision and then inform them that up to the end of the winter, if we manage to separate the classes, if not, then we will issue a closure order,” said Mohammad Mateen Mohammadkhail, a political affairs analyst.
This comes as Sirajuddin Haqqani, the acting interior minister and Mohammad Yaqoob Mujahid, the acting minister of defense, discussed the reopening of universities and schools for women and girls, a source in the interior ministry told TOLOnews.
According to the source, Haqqani and Mujahid decided to discuss the issue when it turned into a much-debated topic.
The source added that to resolve the issue, Yaqoob Mujahid, Sirajuddin Haqqani, and other religious scholars will travel to Kandahar to hold talks with the leader of the Islamic Emirate.