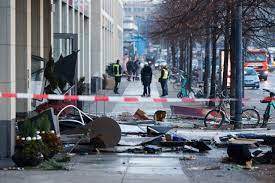 BERLIN (Reuters): An aquarium in Berlin that was home to around 1,500 exotic fish burst early on Friday, prompting around 100 emergency responders to rush to the scene at an inner-city leisure complex, emergency services said.

“In addition to the unbelievable maritime damage… two people were injured by glass splinters,” Berlin police said on Twitter.

It was the world’s largest freestanding cylindrical aquarium at 14 metres (46 ft) in height, according to the website of the DomAquaree complex, which houses a Radisson hotel, a museum, shops and restaurants.

Emergency services shut a major road next to the complex that leads from Alexanderplatz toward the Brandenburg Gate in Berlin due to the large volume of water that had flooded out of the building.

The road as well as the sidewalks outside the complex were littered with debris.

Buses were sent to the complex to provide shelter for hotel guests leaving the building, police said on Twitter, as outside temperatures in Berlin stood around -7 degrees Celsius (19.4°F).