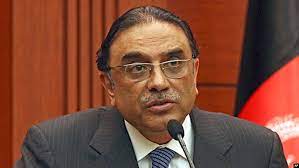 ISLAMABAD: PPP Co-Chairman and former president Asif Ali Zardari has expressed satisfaction over the successful operation of security forces at CTD Bannu Centre, while paying tributes to the three security officials who embraced martyrdom during the action and condoled their deaths, on Wednesday.

He said: “My condolences to the families of martyrs Khurshid Akram, Saeed and Babar and I prayed for their high ranks and eternal peace.”

He also prayed for the speedy recovery of the injured security officials.

In the meantime, he expressed his grave concerns regarding the terrorism resurgence in Khyber Pakhtunkhwa.

He said: “An operation like Swat is needed to defeat the enemies of the country and to end the terrorism in the country.”