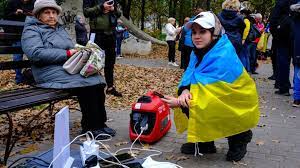 KYIV (BBC): Millions of energy-efficient lightbulbs are needed to help Ukraine cope with Russian attacks on the country’s energy system, President Zelensky has said. Speaking at a conference in Paris, he argued that one of the keys to stopping Russian aggression was to guarantee Ukraine’s energy stability.
Generators are now “as necessary in Ukraine as armoured vehicles and bulletproof vests”, he said.
Russian strikes on Ukraine’s energy grid have left millions without power.
With winter temperatures in parts of the country often below zero for weeks on end, Ukraine has accused Russia of using the cold weather as a weapon against its civilian population. Many parts of the country now only have electricity for a few hours a day. The damage to Ukraine’s energy infrastructure has caused an average shortfall of about two-and-a-half gigawatts of power, Volodymyr Zelensky told an international aid conference on Tuesday.
But supplying the country with 50 million LED lightbulbs, which use less energy than older varieties, would save around one gigawatt of power – reducing the shortfall by about 40%. The EU has already committed to sending 30 million bulbs.
“In these times of suffering and darkness, it is so important to bring light to Ukraine,” European Commission President Ursula von der Leyen said.
Around 12 million people in Ukraine are now disconnected from the electricity grid, President Zelensky told the Paris conference, which was organised to help Ukraine get through winter and to plan the country’s reconstruction. “Unfortunately, this is a typical situation for us. And we expect new Russian strikes every day, which can dramatically increase the number of shutdowns.” Blackouts, both scheduled and unscheduled, have affected almost every region of the country, some lasting days at a time.
Many critical services are relying on generators to keep the lights on, including hospitals and other medical facilities which are forced to limit the number of patients they treat.
“We are prioritising emergencies, trauma injuries, anything related to the war. We understand the consequences,” Ukraine’s Health Minister Viktor Liashko told the BBC.
President Zelensky said more generators were urgently needed, as well as specialist equipment to repair the energy infrastructure. Restoring Ukraine’s power grid would cost about €1.5bn (£1.3bn), he said. Pledges at the conference totalled a little over €1bn, France’s foreign minister said, with €415m allocated to energy.
French President Emmanuel Macron, who hosted Tuesday’s conference, described Russia’s strikes on Ukraine’s power grid as “cynical” and “cowardly”. “They violate without any doubt the most basic principles of humanitarian law. These acts are intolerable and will not go unpunished.” Experts have told the BBC that Russia’s strategy of targeting Ukraine’s infrastructure almost certainly violates international law, because of the disproportionate harm done to civilians.