We rattled out of Dete Station towards the north-eastern boundary of Zimbabwe’s Hwange National Park, an eager dozen – nine tourists, two engineers and one safari guide – en route from Victoria Falls to the Ngamo Plains, an elephant-laden grassland where dwindling acacia forests meet the arid sprawl of the Kalahari sands.

I squinted into the midday sun and sipped a gin and tonic, balancing on one foot and leaning out of the side of our purpose-built, private railcar, hoping for a better view of a vibrant bird perched atop a wire. A fellow passenger had his camera zoomed in all the way. We caught glimpses of electric blue, a longish beak, a large head, but the light made certain identification difficult.

As the train picked up speed, leaving our target behind, we continued the debate. Was it a kingfisher? Some sort of woodpecker? Hearing our fruitless and futile pondering, one of the railroad engineers identified the bird as a lilac-breasted roller. Relieved to have an answer, I added the bird to my running list and settled into my seat.

A single-car train that seats up to 22 people, the Elephant Express seems an unlikely safari vehicle, but it offers an utterly unique safari experience. Rather than searching for the great beasts in a 4×4 or on foot, passengers happen upon them randomly, adding a sense of serendipity to the wonder. 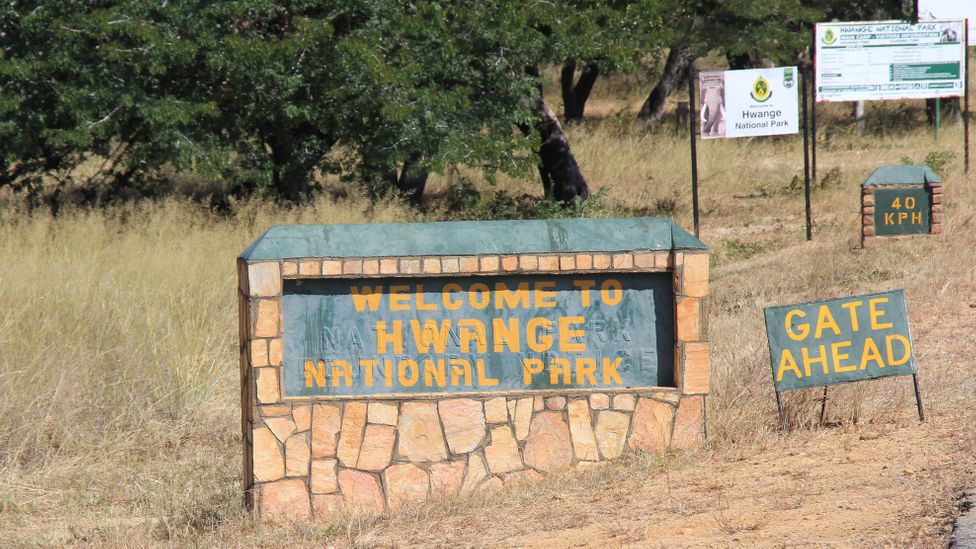 Hwange National Park is the largest park in Zimbabwe, covering an area of more than 14,600 sq km (Credit: Graham, David/Alamy)

We weren’t far out of Dete Station when the engineers slowed and pointed off to the right. Swarming the entrance of the park was a troupe of baboons. There must have been 100 – massive males looking suspiciously over their shoulders, adolescents scampering and body slamming one another, mums with infants Velcro-ed around their necks.

On the rest of the roughly 80km journey, we slowed several times for families of elephants and herds of kudu to cross the tracks. We stopped to spy giraffes grazing in the canopy while zebras and steenbok munched on the underbrush. We saw more lilac-breasted rollers as well as a flock of enormous southern ground-hornbills, spied a brown-hooded (and orange-beaked) kingfisher and heard the cry of a grey go-away bird just in time to spot it.

When Mark “Butch” Butcher – managing director at Imvelo Safari Lodges – first considered launching a tourism train in the 1980s and committed to years of navigating Zimbabwean bureaucracy to make it happen, his vision wasn’t just about the majesty of Hwange’s wildlife. Rather, he aimed to channel the park’s history, and in doing so, highlight the importance of the region’s growing community-based tourism and conservation efforts.

Railroads have been part of the park’s story since its founding. Zimbabwe’s railways were originally built to connect the landlocked county’s mining and agricultural sites with coastal ports in neighbouring Mozambique and South Africa. This particular stretch of tracks was laid in 1904, 24 years before Wankie Game Reserve (Hwange’s predecessor) was established. This led British colonial officials and wildlife experts to question the wisdom of creating a protected area for animals that would be flanked by a functioning train. But the plan went forward and, despite the tracks, Wankie Game Reserve was established in 1928 under the management of game warden Ted Davison. 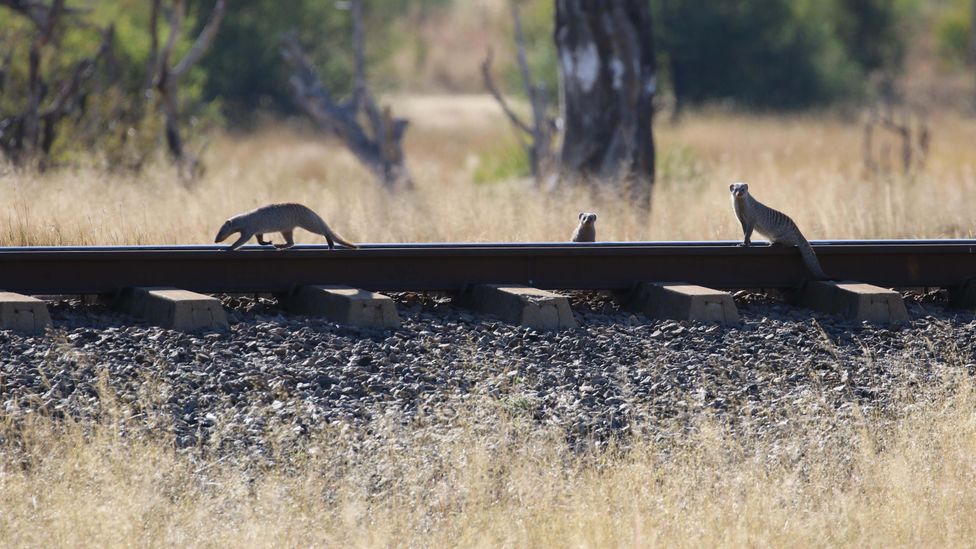 Railroads have been part of the park’s story since its founding (Credit: Graham, David/Alamy)

Today, there’s not an animal in this section of Hwange that remembers a landscape without the trains. It’s not unusual to find lions napping on the sunbaked rails or using them for cover when hunting on the plains. So, when the Elephant Express started in 2015, shuttling people to Imvelo’s lodges, Butcher knew it would give visitors a special safari experience. “Park rangers have hitched rides on the maintenance trolleys on these tracks for years,” the former Hwange park ranger told me.

When Butcher started as a park ranger more than 40 years ago, the tension between the parks and communities was palpable. This is in part because of the way British colonial forces selected the land for conservation, and the ways this played out in subsequent tourism efforts. When government officials of then-Rhodesia set the boundaries of what is now Hwange, they claimed this was because there were few human inhabitants ­– a statement that ignored the largely nomadic families of black Zimbabweans that called the area home – and created a symbolic barrier between the animals and the people.

Over the years, thanks to Davison’s decision to drill boreholes to create a permanent water source and the protection provided by dedicated game wardens and park rangers, the wildlife populations in Hwange grew. The rising numbers of animals attracted paying hunters and tourists from abroad, but they and their money stayed in the park rather than benefitting surrounding communities.

Unfortunately, Butcher explained, swelling animal and human populations has also led to more conflicts with local villagers, who fear elephants may eat their crops and lions will hunt their cattle. By the time Butcher arrived in Hwange, he noted that the “village saw the animals as belonging to the park”. Village residents saw no income from these animals who threatened their own livelihoods. And in Zimbabwe, where many depend on subsistence farming and 60% of people are facing hunger, Butcher said, “wildlife must pay its way to survive”. For some, poaching and illegal hunting fill this void. 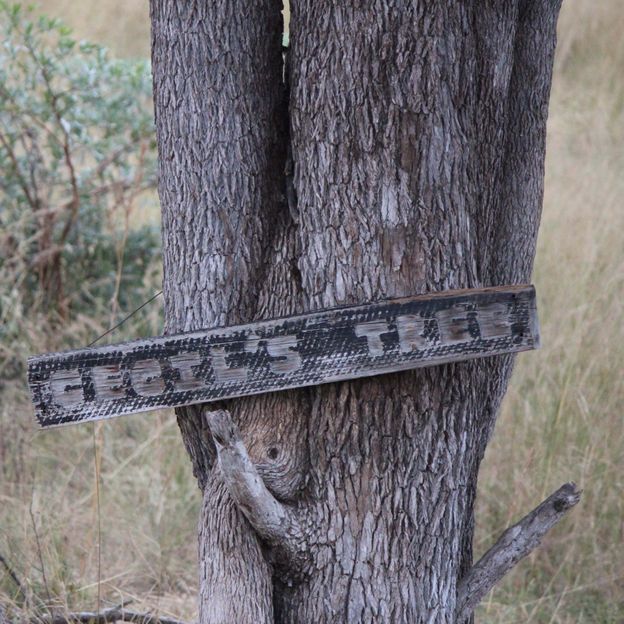 Cecil, one of Hwange’s most beloved lions, was tragically hunted and killed on the park’s outskirts in 2015 (Credit: Stacey McKenna)

Suddenly, our little train came to a stop. We peered expectantly out of the open sides of the railcar for animals, but Vusa Ncube, a Ngamo villager and our main safari guide on the trip, asked us to gather around. Off the left side of the tracks, a wooden plaque reading “Cecil’s Tree” was tacked onto a tree. Ncube solemnly recounted the story of the tragic and illegal killing of one of the area’s favourite lions.

Poaching has also decimated rhino populations in Hwange. Only a handful of black rhinos are thought to remain in the area, and white rhinos have been locally extinct for more than 15 years. In response, Tsholotsho villages along the border of Hwange National Park are working with Butcher and Imvelo Safari Lodges to ensure residents can profit from wildlife conservation and associated tourism. The Elephant Express connects its passengers to two such projects: Imvelo’s Camelthorn Lodge, built on community-owned land; and the Community Rhino Conservation Initiative (CRCI), a project that will translocate rhinos from other parts of Zimbabwe to a string of sanctuaries on communal lands that will eventually open into the park.

My visit was in May this year, when US-based adventure travel operator Wilderness Travel coordinated with Imvelo to bring a small group of travellers to witness the arrival of CRCI’s first rhinos, Thuza and Kusasa. Upon arrival at Camelthorn Lodge, we were welcomed by Siboe Sibanda, lodge manager and Tsholotsho native who keeps everything running smoothly for Camelthorn guests. And because the lodge sits on community land, rather than deep in the national park, she is able to return home in the evenings to spend time with her family. “I want to work in tourism,” Sibanda told me. “But normally, you have to stay away for many days. This way I can go home to my family at night.”

Most of the children in this village have never seen a rhino. But that is going to change

Similarly, the CRCI project is based on the notion that to succeed, conservation in Zimbabwe must fit with community members’ lives and priorities. When we arrived at Johnson and Dorothy Ncube’s homestead, the Ngamo village headman and his wife greeted us in rhino-themed t-shirts. As we sat in a circle sipping tea and coffee, Ncube recalled his excitement at seeing rhinos as a child. “Most of the children in this village have never seen a rhino,” he said shaking his head. “But that is going to change. These are their rhinos. Our rhinos.” 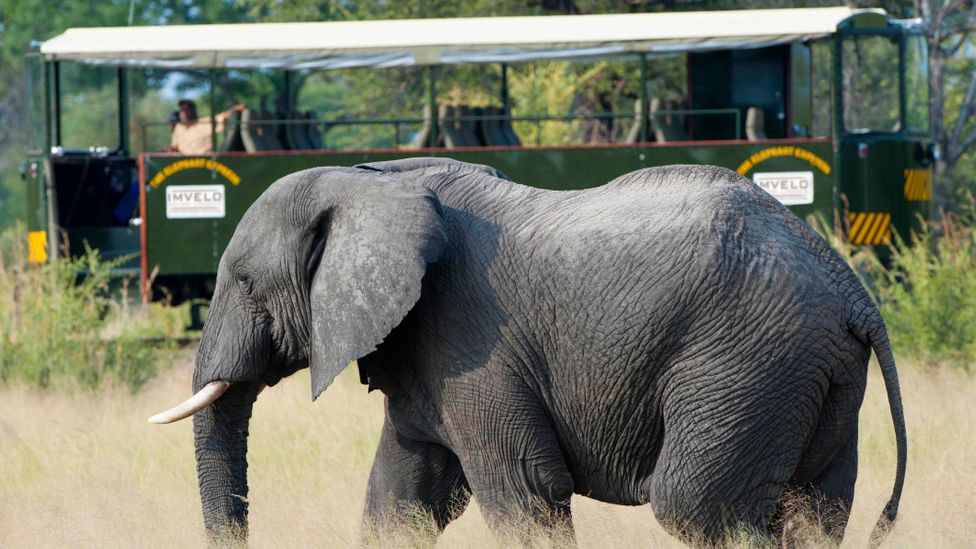 Indeed, from the Ncube homestead, we headed to the local school, where students were drawing pictures of rhinos and preparing short speeches about the importance of the animals to their community. Patricia, a sixth grader, volunteered to speak. “We must save the rhino because it is an endangered species. We must make it safe,” she said. The short speech earned her the honour of being one of the first children to visit the rhinos in person.

This level of ownership is a direct contrast to the way conservation tourism has historically operated in Hwange National Park and Zimbabwe more broadly. And, according to leaders like Ncube and Butcher, it is the best way to serve the region’s wildlife and its people.

As the Elephant Express made the return journey to Dete Station, I enjoyed my encounters with Hwange’s abundant wildlife. But I couldn’t help but wonder: next time I’m here, might I see a rhino crossing the tracks?