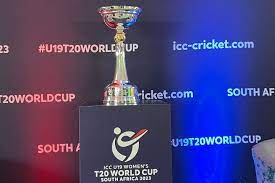 ISLAMABAD: The International Cricket Council launched the inaugural ICC U19 Women’s T20 World Cup in Benoni, east of Johannesburg on Wednesday as excitement continues to build with one month to go until the first ball is bowled.

The event which is a first of its kind in world cricket will take place from 14 to 29 January 2023 and will see the future stars of the women’s game compete in 41 matches played across four venues in Benoni and Potchefstroom in 16 days of competitive cricket.
At the competition launch, former Proteas women’s cricketer and South African Olympic javelin silver medallist, Sunette Viljoen, was unveiled as the ICC U19 Women’s T20 World Cup Ambassador. She was joined by Member of the Executive Council of Gauteng Sports, Arts & Culture, Mr Morakane Mosupyoe, who gave the Keynote address, while other notable guests included Cricket South Africa Board Member and LOC Chair, Ms. Muditambi Ravele, CSA CEO, Mr Pholetsi Moseki, UNICEF South Africa Chief of Communications & Partnerships, Toby Fricker and South Africa women’s team players, Sinalo Jafta and Raisibe Ntozakhe.

The 16 teams in the fray include Indonesia and Rwanda, who will feature in an ICC World Cup for the first time ever.

Scotland, the United Arab Emirates (UAE) and the United States of America (USA) join Indonesia and Rwanda to take the remaining five slots, representing each of the ICC’s five regions giving fans the opportunity to watch tomorrow’s superstars today.
The teams will be divided into groups of four as follows:
Group A: Australia, Bangladesh, Sri Lanka and the USA
Group B: England, Pakistan, Rwanda and Zimbabwe
Group C: Indonesia, Ireland, New Zealand and the West Indies
Group D: India, Scotland, South Africa and the UAE

Entry to all the fixtures will be free of charge. The semi-finals and final will take place at JB Marks Oval in Potchefstroom on 29 January, followed by the ICC Women’s T20 World Cup in Cape Town, Paarl and Gqeberha which begins on 10 February 2022. The two events will play an important role in leaving a lasting legacy to grow girls and women participation in South Africa.

Tournament Director Sivuyile Mqingwana said: “This is a watershed moment for women’s cricket in South Africa and for the game in our country. To host one ICC event in a year is cause for great celebration, but to claim two in such quick succession is beyond our wildest dreams.

“We are excited to promote the women’s game in our region and look forward to hosting yet another world-class event on our shores. Today’s launch just added to the festive mood and excitement that has been growing in our organisation as we count down to the first match of this historic occasion on 14 January.”

ICC Head of Events, Chris Tetley said: “We are delighted to launch the first ICC U19 Women’s T20 World Cup in South Africa. The women’s game is a strategic priority for the ICC, and we look forward to the showcasing of our sport’s future stars in the region of Africa, where cricket continues to grow in popularity.

“With the ICC Women’s T20 World Cup following quickly on the heels of this historic tournament, we eagerly anticipate the delivery of two key events that will play a vital role in the promotion of women’s cricket around the world, in this important time in the growth of our game around the world.” (APP)