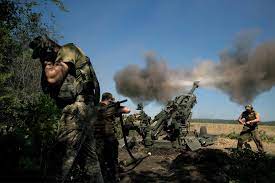 When top US and European defense officials meet at Ramstein Air Base in Germany on Friday to discuss the war in Ukraine, the biggest issue on the agenda will be how the coalition can continue to supply Ukr-aine with more sophisticated weapon systems.
Specifically, the Ukraine Contact Group, a formal as-sembly of some 50 nations, will be discussing tanks. Pr-essure will be on Germany to yield to demands from Britain, Poland, and the Baltic States to send Leopard 2 main battle tanks to Ukraine, and allow other NATO countries that have the tanks to do so too.
This would mark a significant advancement in Western military assistance to Ukraine. It could be seen as an escalation. German Chancellor Olaf Scholz has opposed sending the Leop-ards, despite intense pressure, including from members of his own coalition. He told the Guardian on Wednesday that “we want to avoid this becoming a w-ar between Russia and N-ATO.” Later in the day, G-erman officials told repor-ters it would not send Pan-thers unless the U.S. gave Ukraine American–made tanks, according to the Wall Street Journal.
So far, the United States has refrained from sending its own M-1 Abrams tanks to Ukraine, though like Germany, it has sent infantry fighting vehicles (often misleadingly called “tanks”) and heavy artillery. The Biden administration has welcomed Britain’s promise to send 12 Challenger tanks. This is purely symbolic. On the other hand, the transfer of Leopards (Ukraine has said that it needs 300 Western tanks) would be an altogether more serious affair, even though it would take time to train Ukrainian troops to use them.
Any additional dispatch of additional Patriot anti-missile batteries is far less controversial, because they will be used to defend Ukrainian infrastructure from Russian missiles — a goal on which all NATO countries are agreed.
The discussion of how f-ar the West should go in su-pplying advanced tanks is important but it raises critical, strategic questions abo-ut where the coalition truly wants from what could be interpreted as an escalation by Russia. The following are the key questions they should be asking themselves — but likely are not.