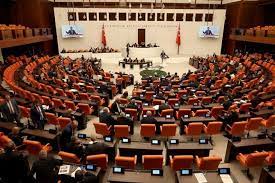 ANKARA (Reuters): A member of Turkiye’s pro-Kurdish opposition party lost her seat in parliament for missing several sessions, the Official Gazette showed on Friday, after she was jailed pending trial on terrorism charges .

Semra Guzel, a member of the Peoples’ Democratic Party (HDP), was jailed pending trial in September over a charge of membership of a terrorist organization, a detention her party said was unlawful.

Guzel had her parliamentary immunity lifted in March after photos of her from several years ago with a militant from the outlawed Kurdistan Workers Party (PKK) circulated on Turkish media.

On Thursday, the general assembly voted to strip her of parliamentary status for not attending six sessions of parliament without an excuse.

Of the 372 lawmakers that voted in the 600-seat parliament, 330 backed taking away Guzel’s seat, state-owned Anadolu Agency said. The decision was published in the Official Gazette on Friday.

Two other HDP parliamentarians had their statuses revoked in 2020 after convictions against them became final.

President Tayyip Erdogan’s AK Party (AKP) and its nationalist allies frequently accuse the HDP of being the PKK’s political wing. Thousands of HDP members have been tried in recent years over similar accusations. The party denies any links to terrorism.

The HDP said in a statement that Guzel’s parliamentary status being revoked was the “latest link in the political coup being carried out” by the AKP.

“Unfortunately, the parliament, whose reason for existence is to hold the people’s will above all, was made to be part of this political coup with an unlawful and unethical decision,” it said.

When the photos first surfaced in January, Guzel said the person was her fiance and the photos were taken when she visited him during a peace process between the Turkish state and the PKK that broke down in 2015.

Critics say Turkish courts bend to Erdogan’s and his party’s will. The government denies this.

The PKK launched an insurgency against the Turkish state in 1984. It is regarded as a terrorist group by Turkiye, the United States and the European Union.