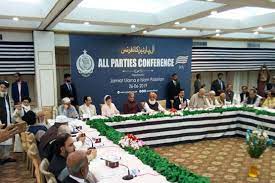 PESHAWAR (APP): All parties conference called by Jamiat Ulemai-e-Islam Fazl (JUIF) on Sunday termed the problems faced by the province including law and order situation, economic crisis and extortion due to failure of the government of Khyber Pakhtunkhwa.
Addressing a press conference here at Mufti Mahmood Markaz after the APC meeting, JUIF Chief Maulana Fazlur Rehman said that the rulers who have been occupying the province for nine years have made the province indebted and destroyed.
He said that the provincial government and the chief minister will have to audit for billion of rupees.
Maulana Fazlur Rehman said that BRT, Malam Jabba and Billion Tree projects should be investigated. He said that the helicopter bill was passed only to protect Imran Khan from NAB cases and we condemn such legislation for personal interest.
The provincial government should provide relief to the people by ensuring the supply of cheap flour, said Maulana Fazlur Rehman.
He said that the people are well aware now from the incompetency of PTI, adding we had no idea that we were stuck in such a quagmire due to the wrong policies of this party.
Maulana Fazlur Rehman further said that Pakistan was on its way to being blacklisted but due to the efforts of the present government, county came to the whitelist that’s why they can’t even hold protests and long marches.
He said that the center is being attacked but we are defending it strategically. He said that news circulating on social media about the technocratic government did not come to my notice.
CPEC was a big project but it was spoiled in three and a half years by the PTI government, adding these people have killed Pakistan economically.
He said that the provincial government should take measures for the safety and peace of the people and better law and order situation.