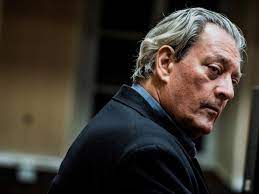 NEW YORK (AFP): The popular US novelist Paul Auster is turning his sights on America’s epidemic of gun violence in a hard-hitting, 100-page essay that features photos from mass shootings.

“Bloodbath Nation” (Grove Press) is due to be published on Tuesday in the United States.

The writing in this new work by Auster, 75, is terse and somber and is accompanied by pictures taken by photographer Spencer Ostrander.

Auster says one of the reasons he is writing it is a family secret that was kept from him until he was a young man.

“The truth comes down to this: on January 23, 1919,” he writes in the book, “my grandmother shot and killed my grandfather.”

Auster says his father was only six years old then and his uncle, who witnessed the killing, nine.

The grandmother went on trial in Wisconsin but was found innocent for reasons of temporary insanity. She and her five children ended up settling in New Jersey, “where my father grew up in a wrecked family.”

“The Gun had caused all this, and not only did the children have no father, they lived with the knowledge that their mother had killed him,” Auster wrote.

Like gun control advocates and victims associations before him, Auster recites the horrifying numbers associated with gun violence in America: more than 40,000 people die by gunfire each year, half of them suicides. And guns outnumber people, by 393 million to 338 million.

The book features dozens of black and white photos by Ostrander of the scenes of mass shootings, such as the LGBTQ nightclub Pulse in Orlando, Florida in 2016. More than 50 people died in that massacre.

They also show a supermarket, a temple, a parking lot, or other places but never a human being.

“I chose to focus on the site of the shooting as a symbol. Whether it’s rebuilt, whether it’s razed, whether it’s left to decay, that’s a symbol of how Americans value this issue,” Ostrander said in October in an interview with Publishers Weekly.

“The fissures in American society are steadily growing into great chasms of empty space,“ Auster writes in his book.