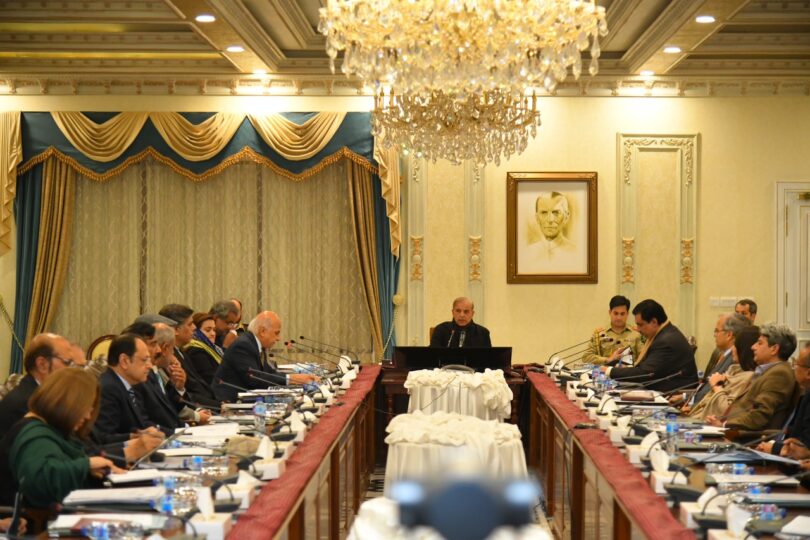 ISLAMABAD: Prime Minister Muhammad Shehbaz Sharif on Tuesday said they had devised a plan to immediately convert all the Federal Government entities’ buildings on solar power by April next year to slash a huge chunk out of the country’s costly fuel import bill hovering around $27 billion.

Unveiling details, he said the procedures for conversion of solar power should be fast-tracked as they had set April 2023 as the timeline for the implementation of the plan.

Addressing a solarization conference, the prime minister said under the plan, all the Federal Government ministries, departments, authorities and their offshoots in the provinces would immediately shift on solar energy.

It would be a model for the provincial governments as the Federal Government would not make additional expenditures over the solarization process, he added.

The prime minister also urged all the relevant authorities and stakeholders to complete the required process by the end of April next year and meet the timeline which had been set. “Consider it as our political, social, national and religious duty to implement it as soon as possible,” he opined.

The prime minister said with the urgent measures, they would be able to generate 300 MW to 500MW of cheap power, thus reducing the import bill worth billions of dollars each year. He assured that the whole process would be conducted through transparent bidding via a third party. He also urged the provincial chief ministers to emulate the Federal Government’s launched pattern and introduce solar systems in their respective provinces and assured his government’s complete assistance in that regard.

“It is the only option of our survival as a nation,” he added. The prime minister said the process for the generation of 10,000MW solar power in the country had already commenced and such a conversation by the Federal Government buildings would be the first phase.
Enumerating the economic challenges faced by the country due to skyrocketing fuel and gas prices after the Russia-Ukraine conflict, he said developing countries like Pakistan had to bear the brunt as the $27 billion costly fuel import bill was a big challenge for them.

The ongoing conflict had also surged prices of gas and worsened its availability as the supply to Europe was disrupted, he added.

The prime minister said during the Covid pandemic, the prices of gas were crashed to the lowest and it was sold at around $2 per unit, the then government committed a criminal negligence by not securing its import and due to it, now the whole nation had been suffering.

He said during former prime minister Nawaz Sharif’s tenure, a 15-year agreement for the purchase of LNG at 13.2 per cent of the Brent was reached with Qatar, but unfortunately, it was politicized by the subsequent government.

Now due to the global situation, gas was not available while the fuel was being sold at an exorbitant price in the global market, he said, adding they would have to convert to solar and renewable energy with lightning speed.

The prime minister said during the previous PML-N government, efforts were made for the production of cheap hydel electricity and land worth Rs100 billion was acquired for the construction of Bhasha Dam, but those were long-term measures to generate affordable power in the country.

He said under the China Pakistan Economic Corridor, coal and gas-fired projects were completed by the PML-N government during 2015 to overcome 20 hours crippling power outages in the country.

“The green lands were turned barren, industries came to grinding halt, and the country’s exports were nosedived,” the prime minister recollecting the past said. In those trying times, former prime minister Nawaz Sharif remained firm and took the bull by the horns with setting up power plants and thus ended the load-shedding, which was a big achievement, “something like the finest chapter in the history of the country, making the nation stronger.”
The prime minister said different past governments in the country had not carried out reforms which swelled the circular debt and the costly power was generated.

He cited issues like power theft, transmission losses and expensive fuels as the reasons behind power production and said the circular debt in power sector had reached whopping Rs 2.5 trillion. Similarly, the gas circular debt was also spiraling.

The prime minister regretted that lack of responsibility and the backlog of years had turned the circular debt into a huge mountain. Those governments had committed negligence that did not introduce reforms to reduce the circular debt, he added.

He said the federal coalition government was an eight-month nascent one facing a mountain of challenges that kept on piling for decades, and expressed the resolve to slowly and gradually overcome those with commitment.

Criticizing the PTI’s government, the prime minister said the NAB-Niazi connivance had pushed the country into an economic and political turmoil. “Unfortunately, I will sorrowfully state that a witch-hunting was carried out and a vendetta in the name of accountability was unleashed against politicians. The worst kind of vengeance was manifested which amounted to fascism. Public servants were disheartened and the government officials faced NAB,” he observed.

He said as Khadim-e-Punjab when he compared his tenures with the previous government of PTI, he could feel a huge difference.

The prime minister referring to the current economic challenges maintained that the entire nation was expecting them to give them respite from the price hike.

He said when they had to pay $27 billion for expensive fuel and spent their local resources for its import, they could not expect development. Only through the conservation of their resources in a proper manner like solar and renewable resources, they would be able to generate inexpensive electricity.

He said the coalition government never wanted to transfer the burden of price hike. In the past, the agreement with the International Monetary Fund (IMF) was blatantly breached by the PTI’s government.

The prime minister regretted that if they wanted to give any subsidy in any sector, they had to go to the IMF, ‘which is a factor and painful reality’.

He said they had no other option, but would have to implement the IMF programme and lauded the Pakistani nation for braving the burden of the price hike with patience. (APP)