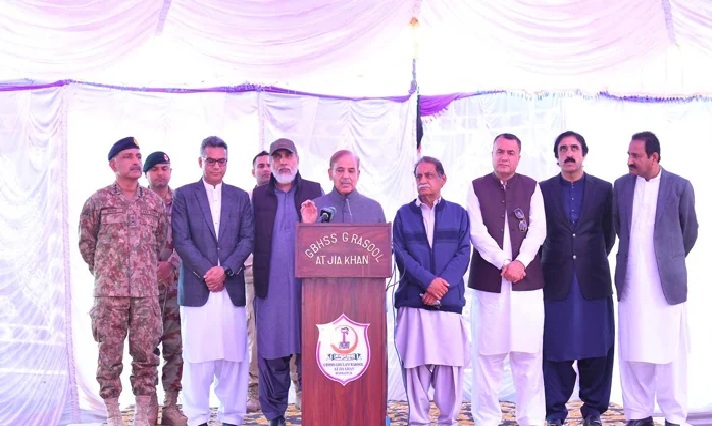 F.P. Report
SOHBATPUR: Prime Minister Shehbaz Sharif on Wednesday expressed the hope that civilized societies would come forward to support the reconstruction and rehabilitation of flood-hit Pakistan at the International Conference on Climate Resilient Pakistan scheduled to be held in Geneva on January 9.
The prime minister, while addressing a public gathering here after the inauguration of reconstructed Government Boys Secondary School of Kili Jia Khan, said he was constantly contacting the leadership of the friendly countries to invite them to the conference.
“Yesterday, I talked to Malaysian Prime Minister Anwar Ibrahim … He assured of sending a delegation to the conference. He will also join through Zoom,” he said and mentioned his telephonic interactions with the leaders of Turkey, Qatar and the United Arab Emirates (UAE) for the purpose. The prime minister said he would co-chair the moot with United Nations Secretary-General Antonio Guterres.
However, he said, the government and the people of Pakistan would have to put in their efforts for rehabilitation. The government, he added, had already distributed Rs100 billion among the flood-affected people through BISP (Benazir Income Support Programme), but more funds were still needed to pay compensation for one million houses destroyed by the flood and many people were yet awaiting assistance for their rehabilitation.
The prime minister, who earlier unveiled the plaque of the newly built school building, announced to develop the facility at par with the Danish Schools of Punjab.
He had committed to inaugurate the upgraded school on March 23, to be equipped with information technology facilities, including e-library, solar energy and playgrounds. He also announced the construction of 12 Danish Schools across Balochistan to provide equal educational facilities to the poor children of the province.

ISLAMABAD: Prime Minister Shehbaz Sharif on Wednesday said that the government would extend its maximum support to the seminaries to help them impart education in accordance with modern-day needs.
The prime minister, in a meeting with a delegation of Ittehad-e-Tanzeemat-e-Madaris, also assured them for providing maximum administrative autonomy to the seminaries and easing their registration process. Lauding the services of the seminaries for religious education, he said that around five million students were studying there free of charge. The seminaries also teach the students to memorise the Holy Quran besides playing their active role to protect Pakistan’s interests.
He said half of the students enrolled in seminaries were girls and thousands of them were orphans. The students were also getting free books and education at the seminaries. Calling the seminaries Islamic or Pakistani NGOs, the prime minister said the government desired to extend its support to them in their social services.