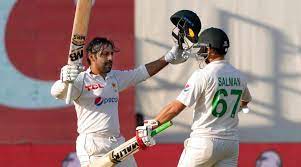 KARACHI (AP): Sarfaraz Ahmed continued his red-hot form with a thrilling century to help Pakistan draw a nail-biting second and final test against New Zealand as the series ended 0-0 on Friday.

The 35-year-old Sarfaraz, who also struck half-centuries in his three previous innings after being recalled for the series following a near-four year absence, made 118 before the last-wicket pair hung on in dimming light for 21 balls to take Pakistan to 304-9, just 15 runs shy of its victory target.

“Dream comeback for him,” captain Babar Azam said. “Sarfaraz did not let the fire die within him in four years. His work ethic was always there and he continued to wait for his turn.”

New Zealand took seven wickets on the final day and was within one more scalp of forcing a win.

Sarfaraz stood firm for 4 fours and 48 minutes and featured in a second successive century stand with Saud Shakeel (32) after the Black Caps had reduced Pakistan to 80-5 before lunch thanks to Michael Bracewell (4-75) claiming two wickets in six deliveries.

Sarfaraz and Shakeel defied New Zealand for nearly three hours before Shakeel fell to a brilliant reflex catch in the slips by Daryl Mitchell early in the final session.

Agha Salman made a brisk 30 but was clean bowled by Matt Henry before New Zealand struck twice with the second new ball under fading light.

Hasan Ali was trapped leg before wicket by Tim Southee and Sarfaraz was superbly snapped up by Kane Williamson low at leg slip off Bracewell’s sharp off-spin, and the Pakistan batter walked off to a standing ovation from the sparse crowd at the National Stadium.

No. 10 Naseem Shah and No. 11 Abrar Ahmed then held out against Bracewell and fellow spinner Ish Sodhi (2-59), with all 10 fielders around the bat, before bad light ended play with three overs left.

“Came down to the last moments, great end to 10 days of pretty tough toil,” said New Zealand captain Tim Southee. “We knew from the nature of the surface that things could happen late in the test but Sarfaraz was probably the difference. We could’ve won had we got him earlier.

Sarfaraz, who hit nine fours and a six in his first test century since making 112 against New Zealand in Dubai in 2014, said: “When 140 runs were left (in the final session), the management said that you need to keep trying to score when the ball is there to hit. If those two wickets didn’t fall then the result could’ve been something else.”