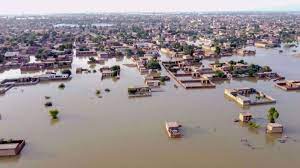 “No country deserves to endure what happened to Pakistan,” UN Secretary-General Antonio Guterres told an international conference in Geneva, which is seeking billions of dollars to support recovery from the disaster.

Guterres opened the one-day event appealing to the world to help Pakistan bounce back from floods which submerged a third of the country, killing more than 1,700 people and affecting more than 33 million others.

Eight million people were displaced, millions of acres of agricultural land were ruined and around two million homes destroyed, while nine million more people were pushed to the brink of poverty.

Pakistan needs $8 billion from its international partners over the next three years to rebuild the country that is reeling from last year’s devastating floods, Prime Minister Shehbaz Sharif said.

The UN chief hailed how Pakistan and its people had responded to “this epic tragedy with heroic humanity”.

“We must match the heroic response of the people of Pakistan with our own efforts and massive investments to strengthen their communities for the future,” he told the conference.

According to Pakistan’s so-called Resilient Recovery, Rehabilitation and Reconstruction Framework, which it will officially present during Monday’s conference, it will need $16.3 billion.

Pakistan’s government has said the country should be able to cover half the cost, but is asking the international community to fund the rest.

“This is the greatest climate disaster in our country’s history,” Zardari told the conference, decrying a “colossal calamity.”

“Pakistan will need considerable support over the next several years from our international partners to implement this comprehensive plan,” he said.

The UN chief said the international community had a particular responsibility to help Pakistan, which has been “doubly victimised by climate chaos and a morally bankrupt global financial system.”

He slammed a system that “routinely denies middle-income countries the debt relief and concessional financing needed to invest in resilience against natural disasters.”

Around 450 participants from some 40 countries had registered for Monday’s event.

Ahead of the conference, Achim Steiner, head of the UN development agency, described the floods as a “cataclysmic event”, and said Pakistan would face “an extraordinary amount of misery” if the world did not step up and help.

“The waters may have receded, but the impacts are still there,” he told AFP. “There is a massive reconstruction and rehabilitation effort that needs to be undertaken.”

Millions of people remain displaced, and those who have been able to go back home are often returning to damaged or destroyed homes and mud-covered fields that cannot be planted.

Food prices have soared, and the number of people facing food insecurity has doubled to 14.6 million, according to UN figures.

The World Bank has estimated that up to nine million more people could be dragged into poverty as a result of the flooding.

Pakistan and the UN stress that Monday’s event is broader than a traditional pledging conference, as it seeks to set up a long-term international partnership focused not only on recovery, but also on boosting Pakistan’s climate resilience.

Pakistan, with the world’s fifth-largest population, is responsible for less than one percent of global greenhouse gas emissions but is one of the most vulnerable nations to extreme weather caused by global warming.

The country “is essentially a victim of a world that is not acting fast enough on the challenge of climate change”, Steiner said.