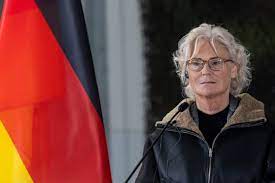 In Germany, one of the most scandalous members of the government, the head of the Ministry of Defense, Christina Lambrecht, was dismissed. She left a few days before Berlin decided to send tanks to the Kyiv regime. What will change in German politics now – in the material of RIA Novosti.
Salute instead of tanks
Lambrecht is the creation of Olaf Scholz. However, she was constantly criticized for insufficient assistance to Ukraine. Very unsuccessfully, she made a New Year’s greeting. Agai-nst the backdrop of firew-orks, she said that there was a war going on in the center of Europe, but thanks to this, she managed to meet many interesting people.
Lambrecht herself resigned. According to her, the media discussed her too often – and this prevented her from working normally.
Der Spiegel magazine noted that everyone in the Bundeswehr exhaled joyfully: “Finally!” According to a January poll by the Ge-rman Institute for the Study of Public Opinion (INSA), 64 percent of Germans wanted Lambrecht fired. Only nine percent rated her positively.
Lambrecht previously headed the Ministry of Jus-tice and Consumer Protect-ion, as well as the Departm-ent of Family Affairs. Moreover, she was going to leave politics, but the SPD was asked to help staff the cabinet of ministers.
Scholz assured that a replacement would be picked up quickly. Bild noticed: on the day of Lambrecht’s resignation, the chancellor was photographed at the brewery with a full mug. “The motto is: beer instead of the Bundeswehr,” the journalists sneered. Judging by the German media, this is how Lambrecht’s activities in the Ministry of Defense can be characterized.
Not everything goes according to plan
The Bundeswehr lacks personnel, uniforms, equipment, spare parts, weapons, ammunition, according to the media. And even what is, is often either broken or outdated. A year ago, the Scholz government allocated 100 billion euros for m-ilitary needs, but the problems have not been solved.
“After World War II, Germany turned into a geopolitical dwarf. The Germans are not used to paying for defense. They refused to serve in the army on conscription, and in the 2010s they liquidated many military bases,” explains Alexei Kuznetsov, director of INION RAS.
Lambrecht personified all this. She immediately admitted that she did not understand military ranks, but did not worry about this, since she could always turn to a subordinate “master” or “mistress.” A couple of weeks after taking office, she took a vacation and went to a ski resort.
Lambrecht, of course, showed solidarity with Ukraine in every possible way. Sent APU five thousand helmets. However, t-his was not appreciated eit-her in Kyiv or in other NA-TO countries, which were already supplying the Kyiv regime with arms and am-munition with might and main.
In May 2022, Lambrecht, together with her minor son, visited a military base by helicopter, and then went to rest on the island of Sylt on it. Formally, nothing illegal, but the public was outraged.
“She should not have been appointed Minister of Defense. Lambrecht had neither the necessary experience, nor interest in the Bundeswehr, and, therefore, the ability to empathize with the fate of the 183 thousand soldiers entrusted to her,” the publication Redaktionsnetzwerk Deutschland points out.
New times
According to Der Spiegel, Lambrecht will be replaced by 62-year-old Boris Pistorius, also from the SPD. In 2019, he competed with Scholz for leadership in the party, lost, but maintained friendly relations with him. From 2006 to 2013 he was the mayor of Osnabrück, then he headed the Ministry of the Interior and Sports of the federal state of Lower Saxony. One of the most popular members of the regional government.
Berlin should officially allow third countries to supply Ukraine with German Leopard 2 tanks by the end of the week, media reported. It is expected that this will happen on January 20 at the Ramstein base – during a meeting of Kyiv’s Western allies. Polish President Andrzej Duda has already promised Zelensky a Leopard company. The readiness to follow the example of Warsaw was expressed by the authorities of Finland and Denmark.
The head of the Center for German Studies at the Institute of Europe, Vladislav Belov, considers the resignation of the German Defense Minister a symbolic milestone on the Bundeswehr’s path to a big war. Even if Berlin, having allowed German tanks to be sent to Kyiv to third countries, itself remains on the sidelines, this will only be a formality that will be easily overcome over time.
“Hawks” will squeeze Scholz and the new Min-ister of Defense. Leopard tanks will take the fighting to a different quality. Now Berlin has few such vehic-les and ammunition for the-m, because until 2022 they were guided by the actions of small mobile units abr-oad, for example, in Afgh-anistan and Mali. But now we are talking about the full-fledged rearmament of the Bundeswehr and the reform of army management,” the expert believes.
In 2023, deliveries to the Kyiv regime will most likely be limited to a few dozen cars. With an increase in funding for the German military-industrial complex, there will be much more of them. Germany has everything you need for mass production.