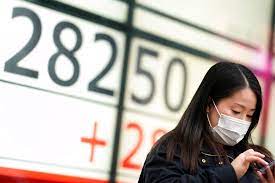 HONG KONG (AFP): Asian markets rose Wednesday and the dollar struggled to recover as investors welcomed softer-than-expected US inflation data that could allow the Federal Reserve to slow down its pace of interest rate hikes.

The reading provided some much-needed Christmas cheer on trading floors and came the day before the US central bank’s last policy decision of the year, which will be pored over for clues about its plans for 2023.

There is also some focus on China as it continues to roll back its strict zero-Covid strategy that has battered the world’s number two economy, though fears of a sharp surge in infections is causing some unease among dealers.

The reading followed an October slowdown and fuelled hopes that inflation has finally peaked, after several months of Fed rate hikes.
“Last month’s positive surprise came with the caveat that it was ‘just one month of data’ but the November numbers add further weight to the interpretation that the long-awaited goods disinflation is showing up in the data,” said National Australia Bank’s Taylor Nugent.
Asian markets tracked Wall Street higher, though the gains were limited ahead of the Fed meeting.

And the dollar held the losses suffered Tuesday in reaction to the inflation report, with the yen, euro and pound the main beneficiaries.
While the Fed is widely expected to increase borrowing costs 50 basis points Wednesday — after four successive 75-point rises — its post-meeting statement and boss Jerome Powell’s comments are the main focus for traders.

And while the slower inflation print was welcomed, there is still a growing concern among investors that the US economy will tip into recession next year as rates will remain elevated until prices are brought under control and within the bank’s target around two percent.
Silvia Dall’Angelo, at Federated Hermes, said monetary policymakers would slow the pace of hikes so they could “assess the impact on the real economy from the large cumulative tightening that has taken place since March.

“However, the Fed will stress that it is still far from mission accomplished with respect to its fight (against) high inflation, and more hikes will follow in coming months,” she added.

“Our expectation is that while inflation will decline over 2023, it will remain above target, which will prevent the Fed from easing next year.” Oil prices edged down slightly after rallying on the back of the weaker dollar, though Brent held above $80.