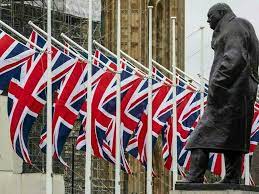 The Consumer Prices Index eased to 10.7 percent last month, the Office for National Statistics (ONS) said in a statement.
That compared with 11.1 percent in October, which was the highest level since 1981. Market expectations had been for a November reading of 10.9 percent.

The modest slowdown followed falls in the price of motor fuel, but inflation remains high owing to soaring domestic energy and food bills.
The data was published on the eve of an interest rate decision from the Bank of England, which is widely expected to deliver the ninth hike in a row as policymakers try to tackle rampant prices.

It also comes as strikes spread across the economy, with workers protesting over salaries that have failed to keep pace with runaway inflation.

“Although still at historically high levels, annual inflation eased slightly in November,” noted ONS chief economist Grant Fitzner.
“Prices are still rising, but by less than this time last year, with the most notable example of this being motor fuels.”

“The aftershocks of Covid-19 and Putin’s weaponisation of gas mean high inflation is plaguing economies across Europe, and I know families and businesses are struggling here in the UK,” Hunt said.

“Getting inflation down so people’s wages go further is my top priority.”

“I know it is tough for many right now, but it is vital that we take the tough decisions needed to tackle inflation — the number one enemy that makes everyone poorer.”