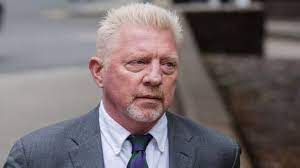 LONDON (Agencies): Former Wimbledon champion Boris Becker has been released from prison after serving eight months of his sentence for hiding £2.5m worth of assets and loans to avoid paying debts.

The 55-year-old German was jailed for two and a half years in April after being found guilty of four charges under the Insolvency Act. He was released from prison on Thursday morning.

The BBC understands Becker will be deported from the United Kingdom. A Home Office spokesperson told BBC Sport: “Any foreign national who is convicted of a crime and given a prison sentence is considered for deportation at the earliest opportunity.”

Becker qualifies for automatic deportation as a foreign national who does not have British citizenship and received a custodial sentence of more than 12 months.

Becker has lived in the UK since 2012, having retired from playing in 1999. He won six Grand Slam singles title, including three at Wimbledon, during his 15-year career.

He was declared bankrupt in June 2017 over an unpaid loan of more than £3m on his estate in Mallorca, Spain. Becker went on trial earlier this year having been accused of hiding millions of pounds worth of assets to avoid paying his debts.

He was ultimately found guilty of four charges relating to his bankruptcy but was acquitted of a further 20. It was reported that Becker was initially held at Wandsworth Prison in south-west London before being moved to Huntercombe Prison in May.