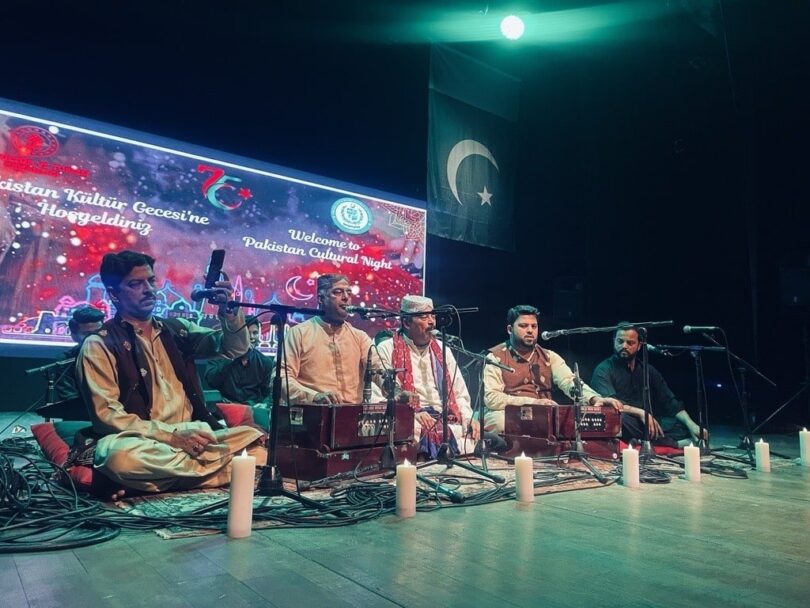 ISTANBUL : Marking the 75th anniversary of Turkish-Pakistani ties, a traditional ‘qawwali’ art performance took the stage in Istanbul, offering an experience that makes you groove with the rhythm and with every beat of the instruments, a phenomenon that leverages spiritual satisfaction.

“Wo chahe to qatre ko samandar karde” (“If He wants, He can turn a droplet into an ocean”), sang Qawal Fareed Ayaz in his verses of “qawwali” during a splendid performance at the cultural night hosted in Istanbul by the Pakistani Consulate during an event to commemorate the 75th anniversary of the establishment of diplomatic relations between Pakistan and Türkiye.

Speaking at the event, Pakistan’s Ambassador to Türkiye Yousaf Junaid elaborated on the friendly ties between the two countries, uniting them under a special bond within the sphere of spirituality, both culturally and traditionally.

In line with this great spiritual bond, the cultural night featured a “qawwali” performance to celebrate this close friendship. Qawwali is an energetic musical performance of Sufi Muslim poetry that aims to lead listeners to a state of religious ecstasy and to a spiritual union with Allah. Deriving its name from the Arabic word “qaul,” meaning “to speak,” qawwali is a musical vehicle by which a group of musicians called qawwals addresses spiritual love in terms of worldly love and intoxication.

However, this performance was unique. As the hypnotic rhythms and melodies fascinated the audience accompanied by applause, its transcendent and poetic form was so powerful that it caught many by surprise.

Ustad Ghulam Fariduddin Ayaz al-Hussaini Qawwal leads the group, along with his younger brother Abu Muhammad. They were joined by their other brothers and family members. According to the members, the Qawwal brothers had a chance to learn this expressive form of art from their father, the esteemed Ustad Munshi Raziuddin, who hails from the “Qawwal Bachchon Ka gharana,” a tradition stretching back to the 11th century.

Hazrat Nizamuddin Aulia was one of the prominent figures of this type of art, a descendant of the Chistiya Tarriqa of Sufism who used music in his spiritual congregation. In the 13th century, his disciple Amir Khusroo blended the ideologies and structures of Persia, Türkiye, India and Arabia to give a definitive direction to the Qawwali music.

Similarly, the group, in the typical style of their genre, is led by powerful vocalists, who loop through multiple verse-chorus sequences backed by other singers as well as harmonium, tabla, dholak (traditional musical instruments) and hand claps.

In Fareed’s words, “Qawwali is not show business. It is not even singing, really – it is praying, an exercise to improve your soul.”

As they performed the well-known story “Layla and Majnun,” the epic love story, the excerpts from the performance said: “When Majnun was asked why he loves Laila as her skin is dark. While Majnun replies, ‘The love that means the most is not based on color because if the color black was to be hated then the Holy Quran would not be written with black ink.'”

It is also all about the interaction through the performance. The form may distract you off and on but it always brings you back with the motion of its rhythm, closely following the stories told by the qawwal. It may lead one to love themselves in the unconventional rhythms and the sound or question their inner self through the morals of the story. At the end of the day, the repeating chants, musical instruments and rhythm deliver you to a blissful state of mind.

Starting slow, it employs lyrics to engage the listeners, building the tempo slow and steady and involves all the other elements of the composition to elevate itself to reach the zenith of mysticism.