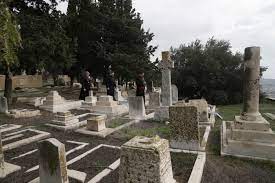 The graves of Christian figures at the Protestant Cemetery were found pushed over and pulled from their foundations on Sunday, unsettling the contested city’s Christian minority and drawing worldwide condemnation. The cemetery is more than 170 years old and houses prominent members of the armed forces and clergy in the holy city.

Late Thursday, the US Embassy’s Office of Palestinian Affairs said it was “concerned” that the religious site was targeted again — the second time in a decade.

“Religious site vandalism by anyone is unacceptable,” the office said. “Jerusalem must be a city for all of its people.”

Israeli police did not name the suspected vandals but said they were ages 18 and 14 and residents of central Israel. Security camera footage of the attack showed two young men wearing a Jewish skullcap and tzitzit, the knotted ritual fringes worn by observant Jews, knocking over crosses, breaking tombstones and throwing debris over the graves.

“Any damage to religious institutions and sites is serious and harms the unique and delicate fabric of life that exists in the city,” the police said, describing the act as “intentional vandalism.” A Jerusalem court on Friday held a hearing to extend the detention of the two teenagers.

The Anglican Church in Jerusalem has denounced the desecration as the latest hate crime targeting the Christian community in Jerusalem amid the decadeslong Israeli-Palestinian conflict.