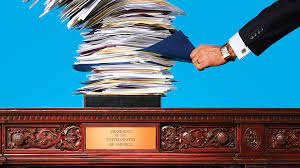 ISLAMABAD: President Pakistan Economy Watch (PEW) Dr. Murtaza Mughal has said that negative policies, politicking over national issues has increased anxiety of the masses and a large number of countrymen seem to be disappointed about future of the country.

In a statement issued here on Saturday, he said that that wrong policies and politicizing economic decision despite challenging situation was neither benefiting governor nor supporting public interests.

Dr. Murtaza Mughal was of the view that the economic conditions of the country has remained poor for the past several years, but now the situation has become alarming and the masses seem to be worried. He said that the country’s economy was nosediving, there were no new jobs and existing jobs were also decreasing in various sectors and the country’s default has become the most important issue of discussion among the public.

The agriculture, industrial and service sectors were in decline and the country’s population was getting poor day by day, the President PEW added. He said that masses have been forced to cut essential expenses while education and health have become a luxury ending the prospects for future development.

Dr. Mughal said that small businessmen were worried about the situation while many entrepreneurs were moving their businesses and capital abroad out of desperation which will not be good for Pakistan. Youth are leaving the country in large numbers which has never been seen in the past which indicates that they see no future for themselves in Pakistan.

He said that the majority of local and foreign investors are considering an investment in Pakistan as a high-risk deal while the majority of people believe that politicians lack any solution to the existing problems and they have no desire for it because their attention is focused on politics and serving the elite. (INP)