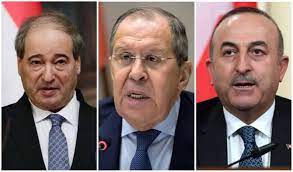 ISTANBUL (AFP): The foreign ministers of Turkiye, Syria and Russia will meet “in the second half of January,” the Turkish foreign minister said Saturday, in the latest sign of rapprochement between Ankara and Damascus.

“We have decided to hold a tripartite meeting in the second half of January. The meeting could take place in a third country,” Foreign Minister Mevlut Cavusoglu told reporters in Ankara, according to the NTV news channel.

The defense ministers of Turkiye, Syria and Russia met in Moscow on Wednesday for the first time since the start of the war in Syria in 2011, which has strained relations between Ankara and Damascus.

In mid-December, Turkish President Recep Tayyip Erdogan said he might meet his Syrian counterpart Bashar Assad after meetings at the level of defense and foreign ministers.

Turkiye, a neighbor of Syria, has for more than a decade been the most important political and military backer of the Syrian opposition.

Analysts say Moscow is trying to bridge the divide between its two allies, united by a common “enemy” — Kurdish forces in northern Syria, described as “terrorists” by Ankara and backed by Washington.

Ankara launched a series of air raids against Kurdish fighters in northern Syria in late November, threatening a new ground operation following three such operations since 2016.

The Turkish and Syrian foreign ministers had a brief informal exchange on the sidelines of a regional summit in 2021 and Ankara acknowledged intelligence contacts.

Fiercely opposed to the regime of President Bashar Assad since the start of the conflict in 2011, Turkiye has in recent months softened its stance toward Damascus as it seeks to improve its relations with Arab countries.

Erdogan, who has repeatedly called Assad a “murderer” in recent years, said last month that a meeting with the Syrian leader was “possible.”