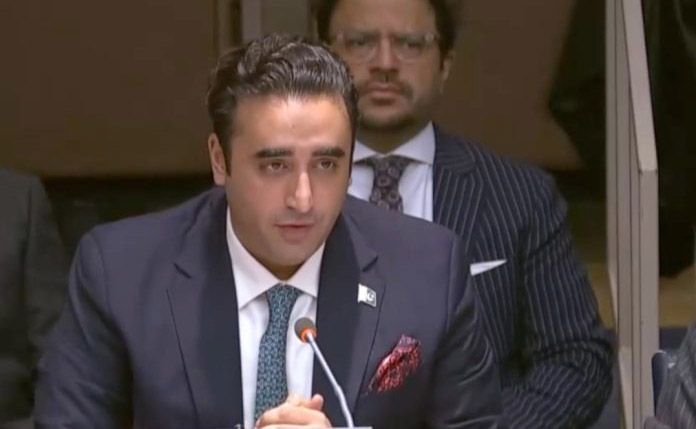 NEW YORK (APP): Pakistan on Thursday said that as the developing countries endeavored to recover from multiple crises, the Group of 77 and China must take the lead in promoting the systemic and structural changes needed to revive sustainable global growth.
Foreign Minister Bilawal Bhutto Zardari, also the host of the G-77 and China Ministerial Conference held here, in his opening statement, urged the body to induct equity in international economic relations and restore the developing economies on a path leading to realization of the SDGs and environmental objectives.
The ministerial meeting is being held with an aim to agree on the “urgent and emergency measures required to enable the developing countries to overcome the immediate challenges of food, fuel and finance which they confront at present; and systemic measures and structural changes needed to accelerate the implementation of the SDGs.”
The foreign minister emphasised that the developing countries which continued to suffer from the severe impacts of climate change must be assisted, urgently and generously, to recover from these impacts, “even as we start work on operationalizing the loss and damage fund agreed at CoP-27.”
“Without such emergency and systemic actions, the development divide will grow into an unbridgeable gulf, transforming our world into a nightmare, a world afflicted by massive human suffering, social and political instability, and proliferating conflicts, even as our planet and our species confront the mounting existential threat of a climate catastrophe.”
He said as the majority of developing countries faced unprecedented challenges to their economic progress as well as the danger of social and political turmoil, over the past three years, their economies and societies had been ravaged by a series of crises: the Covid-19 pandemic; supply chain disruptions; spiraling prices; depreciating currencies; climate-induced disasters and geopolitical tensions like the Ukraine war.
He told the meeting that the global economic growth next year was predicted to be less than 3% and with the North also walking back from globalization, export-led growth was becoming difficult for most of the developing countries.
He said besides achieving the SDG goals, the developing world also simultaneously needed to recover from the loss and damage from climate impacts and adapt to avoid future impacts.
“Overcoming the development and climate challenges requires herculean efforts by our governments. And, it requires extensive international solidarity and cooperation. The SDG financing “gap” has enlarged from $2.5 trillion in 2019 to over $4 trillion today. If the cost of climate objectives is added, we will need several additional trillions to achieve the SDGs and the climate objectives.”
Foreign Minister Bilawal said, “250 million face hunger. Famine haunts millions. 82 of our members are debt vulnerable; 54 are in debt distress. Financial austerity will freeze their growth and entrench and enlarge hunger and poverty. We must chart a path to break out of the poverty trap.”
He said the Conference was aimed at initiating actions to respond to the urgent challenges confronting the developing countries and to outline a strategy to secure the reforms to the international financial and economic system required to achieve the SDGs and the Paris objectives. He thanked the UN Secretary-General Antonio Guterres for setting up the Emergency Task Force and supporting many of its recommendations, and urged the WFP to ensure food supplies for the 250 million in hunger.
He told the international gathering that the recently issued UNCTAD Trade & Development Report, the UNDP’s Debt Report, and DESA’s analysis have identified several measures including a call for major Central Banks and the IMF to reverse rising interest rates; halt austerity programmes; provide fiscal space to the 82-debt distressed and vulnerable countries. He also called for the relevant UN bodies to examine a mechanism to cap commodity and fuel prices for developing countries, ensure their access to food, fuel, and fertilizer and discourage commodity speculation. Endorsing the UN chief’s call for reformation of international financial architecture, the foreign minister suggested a multilateral mechanism for the sustainable management of sovereign debt; fulfillment of the agreed ODA target of 0.7 p.c. of the GNI of developed countries; the wide utilization of SDRs offering a critical and tested modality to generate financing for the SDGs and climate action.
He also emphasised the mechanisms to lower borrowing costs for developing countries which should also mobilize domestic resources by building their capital markets and enhancing tax coverage and revenues.
Moreover, he said the climate change agenda and climate commitments must be “fully and faithfully” implemented and called on the developed countries to fulfill their pledge to provide $100 billion-plus annually in climate finance; allocate half of this to climate adaptation, and urgently operationalize the fund for “loss and damage”. “We must also urge the developed countries to assume the burden of mitigation and reach net-zero emissions well before 2050.”
He said the transition to a sustainable global economy required a rapid installation of sustainable infrastructure – energy, transportation, housing, manufacturing, and agriculture, needing an estimated investment of $1 trillion per year.
He said, “We should welcome initiatives such as China’s Belt and Road Initiatives and the G-7’s Global Infrastructure Initiative. We must also develop vehicles that can access private capital for high-quality sustainable infrastructure investment in developing countries.” Calling for the restructuring of international trading system to revive export-led growth in the developing countries, the foreign minister said the developing countries should be offered the required policy space for industrialization e.g. through waivers from the TRIPS and TRIMS Agreements.
He stressed the need for adopting an international technology agreement, aligned with the SDGs, through inclusive negotiations which should focus global research and development resources and capabilities on scientific breakthroughs.
Besides, he said it was also vital to adopt an equitable international information technology regime serving to bridge the digital divide and enable the developing countries to “leapfrog” into the global digital economy of the future.