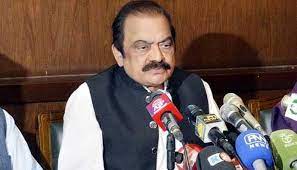 ISLAMABAD: Interior Minister of Pakistan Rana Sanaullah Thursday said that most probably Pakistan Democratic Movement (PDM) will not take part in the by-polls as taking charge for only two months takes us nowhere.

Rana Sanaullah upon arriving in London to meet the party leader said that they will consult about the organizational matters of the party and the current political situations in Pakistan at the meeting. He said that the by-polls whose positions will only sustain for two months are not beneficial for them and they will take part in the General Elections in October.

Javed Latif said that he strictly condemns the arrest of the journalist who unveiled General Bajwa’s assets. He brought out the truth.

He said that the people in the organizations and institutions should not be given this much power. No one should be an outlaw and no one should consider themselves above the law.

Javed said that Nawaz Sharif can call forward anyone for taking the charge. They were only given 1 and a half months and not eight months. He said that applications were filed in his own government.

He also hinted at Nawaz Sharif being in Pakistan soon.