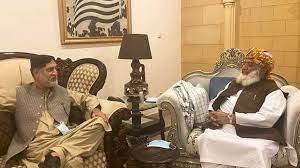 In his talk with Akhtar Mengal on phone, Shehbaz Sharif discussed a string of issues including the overall political situation prevailing in the country.

Sardar Akhtar Mengal conveyed to the prime minister his party’s reservations of the Riko Diq agreement. Shehbaz Sharif assured the BNP leader of allaying his fears about the Reko Diq legislation.

The prime minister also contacted Maulana Fazlur Rehman and discussed the issue of Reko Dik and also informed him about the committee constituted in connection with the issue.

It may be mentioned here that the federal cabinet had on Tuesday given its nod to the Reqo Diq project amid a walkout staged by Jamiat Ulema-e-Islam-Fazl (JUI-F) and Balochistan National Party-Mengal (BNP-M) members.

The JUI and BNP members, key allies in the coalition government, recorded their protest in the cabinet meeting and then walked out.

Both the parties had expressed their reservations for not taking them into confidence over the legislation regarding Reko Diq agreement.

Other federal ministers tried to calam the JUI and BNP members after their storm out of the meeting but in vain.

The government admitted that the reservations of both parties are valid and amendments will be added soon. However, JUI and BNP decided to boycott cabinet meetings until the amendments presented by them are incorporated into the Bill and left the Prime Minister’s House.

Meanwhile, BNP chief Sardar Akhtar Mengal had chaired a meeting of the BNP senior leaders and discussed the current political situation in the country.

The meeting seriously considered the option to leave the coalition government while the senior leaders gave their suggestions on the alliance to the government.

The party chief made the final decision on the alliance with the government subject to the decision of the core committee meeting, sources said.

On the other hand, the sources said Prime Minister Shehbaz Sharif had constituted a committee to hold negotiations with the coalition partners and allay their reservations.

The PM had nominated Federal Law Ministers Azam Nazir Tarar and Ayaz Sadiq to hold talks with the disgruntled leaders of both the parties and take them into the confidence.

Meanwhile, the cabinet had approved the multi-billion dollars Reko Diq project deal following the endorsement of the project by the Supreme Court of Pakistan and also approved the clearance of liabilities of Chilean firm Antofagasta.

According to details, the federal cabinet okayed an important decision related to the Reko Diq project, allowing the authorities to clear the liabilities of Chilean firm Antofagasta.

The cabinet had emergency approval through circulation. A total of more than $22.7 million of interest will be allowed to clear the liabilities.

The Finance Ministry had been directed to arrange the interest payable for Balochistan’s share.

The parliament had already passed the legislation regarding Reko Diq agreement.