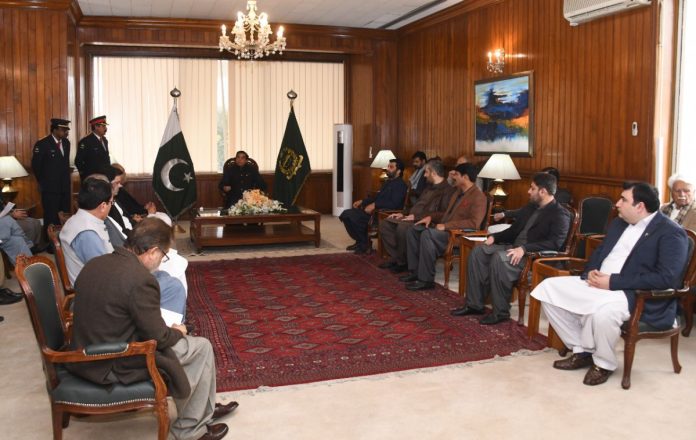 ISLAMABAD (APP): National Assembly Speaker Raja Pervaiz Ashraf on Thursday invited the Pakistan Tehreek-e-Insaf (PTI) members to again become part of the National Assembly and play their constitutional role in the larger national interest.
Reconciliation was need of the hour to overcome the challenges being faced by the country, he said while talking to a delegation of PTI members of the National Assembly (MNAs), led by former speaker Asad Qaiser. The PTI delegation included former deputy speaker Qasim Khan Suri, Malik Amir Dogar, Attaullah Khan, Amjad Khan Niazi, Niaz Ahmad Jakhar, Dr Shabbir Hussain Qureshi, Faheem Khan, Lal Chand Malhi and Tahir Iqbal.
Raja Pervaiz Ashraf said as a speaker, he would give ample opportunity to the PTI members to explain their position at the floor of the National Assembly.
He said the Parliament was the only forum where the politicians could sit together and solve the problems of people and the country. The politicians should have contact on sustainable basis and doors for negotiations must not be closed, he stressed. Emphasizing the politics of reconciliation, he said for the sake of the country’s interests, the whole leadership should work beyond their political affiliations.
He pointed out that under Article-64 of the Constitution, the resignation should be handwritten. “Once it is received, the speaker meets the respective member to ascertain whether or not it was submitted under duress.” He mentioned that several PTI lawmakers had moved courts, which showed that the party had decided to use the move to pressure the government.
He said some of the resigning PTI members had applied leave from the House, some others came to the House to just mark just their attendance, while some had already pleaded that their resignations must not be accepted. He said an MNA from Karachi whose resignation was accepted had filed a petition in the Islamabad High Court and submitted an affidavit that he had not resigned.
He said that an MNA was a representative of some 600,000 to 700,000 people and before accepting his / her resignation, the speaker must be satisfied that the same was tendered voluntarily not under any duress.
Answering the question of Asad Qaiser, the speaker said the National Assembly Secretariat was ready to again write letters to the resigning MNAs. The PTI delegation members replied that they would have to consult the party in that regard.
The meeting was held in a very cordial atmosphere. Deputy Speaker Zahid Akram Durrani was also present in the meeting. On the occasion, Fateha was also offered for the departed soul of the grandmother of Zahid Akram Durrani.