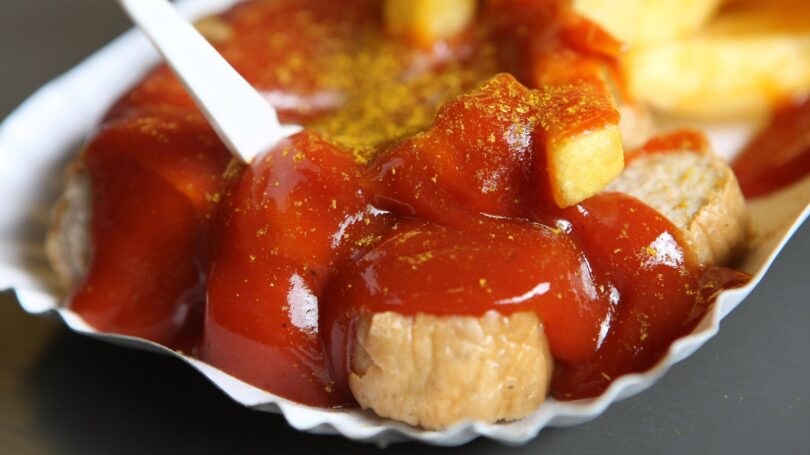 (CNN): It’s the time of year for merriment and all that it might entail. But indulgences of alcohol often lead to less-than-pleasant mornings after.

Since there’s no magic hangover pill (not yet, anyway), what can you do when you overdo it?

The answer, for many, lies in carbohydrates. A hangover is essentially severe dehydration and a drop in blood sugar, which leaves the overindulged feeling a range of symptoms: nausea, fatigue, irritability and aches.

In spite of this sobering reality, we still sometimes find ourselves feeling hungover on occasion, desperate for a “cure.” Tackling dehydration and elevating low blood sugar levels is key, and drinking plenty of water and fueling the body with carbs, healthy fats and protein can help.

Of course, the best way to avoid a hangover is to abstain from drinking. If that’s unappealing, you’ll have to find a way to power through.

A book by Lauren Shockey, “Hangover Helper,” is filled with recipes from around the world for the DIY crew among us. Most of the following food and drink items are readily available for purchase.

From currywurst to pickle juice and avocado toast, here’s a look at how people all over the world turn to food and drink to mitigate a hangover:

Although experts advise to avoid alcohol the next day, many people swear by a little “hair of the dog.” Nothing beats the Bloody Mary if this is the direction you so choose.

While you can find it all over the world, the drink has special significance in Paris, where it was invented in 1921 at Harry’s New York Bar.

Many bars around the world have put their own spin on the Bloody Mary (horseradish is now more common than not), but at Harry’s, it’s still made the classic way: vodka, tomato juice, Tabasco, salt, pepper, lemon and Worcester sauce.

Hot, melted cheese is a critical part of pizza’s allure when hungover, but pizza isn’t the only way to get your cheese fix. In London, simple cheese on toast is a thing of beauty and also a breeze to make at home, no matter how much you’re struggling.

Slide bread under the broiler — or grill, as they say in the UK — to lightly toast both sides, then slather on butter and spicy mustard and pile grated cheddar on top. Slide back under the broiler until the cheese is melted. Voila! You’re now that much closer to getting through the day.

Currywurst is a great accompaniment to French fries.

Although Berliners will enjoy a currywurst at any time of day, this classic German snack is perhaps best the day after a big night out in Berlin.

For the uninitiated, a currywurst consists of fried pork sausage sliced into bite-size chunks, then doused in a spiced curried ketchup before being dusted with curry powder.

The rich sauce, meaty sausage and subtle heat from the spicing wakes up the dulled senses and provides a revitalizing boost. It’s even better when paired with fries.

The country’s signature sandwich is all about messy, delicious indulgence. Think thick slices of roasted and grilled pork neck nestled in a soft bun with crispy crackling, pickled cucumbers, red cabbage and a spicy mayonnaise.

Have it to help ward off a hangover (Kødbyens Høker, an outdoor kiosk in the city’s meatpacking district is popular for a reason), or make it your first stop when you wake up with a massive headache and hunger.

Anyone who’s spent a night out drinking with the locals in Manila can attest to the city’s ability to have a good time.

“As for eating after heavy drinking … many Filipinos usually go for tapsilog,” Navarra said. “It’s basically like cured, semi-dried or marinated beef with garlic rice and a fried egg. I really like how it’s simple, filling and super-convenient, with places that sell it all over metro Manila.”

The name of the game in Manila is trying to get ahead of the hangover by going all in on a big, greasy meal at the end of a boozy night.

Smashed avocado and poached eggs with cherry tomatoes is an Australian original — a popular option when hungover too.

Sydney’s café culture is famous for its healthy brunch dishes. Smashed avocado on toast, now a ubiquitous item on trendy brunch menus around the world, is an Australian invention.

Avocado’s high potassium content helps with replenishing that key nutrient, and eggs, which contain Vitamin A, make the dish a solid hangover pick. Add a little hot sauce to kick up the flavor, and you might start to feel your senses wake up.

Tokyo overflows with Michelin-starred restaurants, but a multicourse tasting menu is probably not what you want if you’re feeling rough around the edges.

Hisato Hamada, co-founder of Wagyumafia, a fast-casual chain famous for its luxurious Kobe beef sandwiches, says his go-to hangover remedy is to eat before bed after a night out.

“Since eki-soba is located on the [train] station platform, you can get it on your way home, and it’s usually prepared super quick, meaning you can have a bowl within 30 seconds of ordering (very helpful when you’re drunk),” says Hamada.

“My favorite kind comes with tempura and a raw egg, extra shredded negi (Chinese leek) and a Tokyo-style thick soy sauce that is warm and nourishing. Overall it’s a very comforting and filling quick meal to get you back in working order.”

Thailand has one of the world’s richest food cultures — along with a renowned nightlife scene — so it’s no surprise that there’s a plethora of nourishing, soul-restoring foods from which to choose after a long night out.

Perm Paitayawat, on Instagram as @theskinnybib, is a food writer, researcher and an authority in Thai and Asian food cultures.

“The first and foremost hangover-battling food choice for Bangkokians is ‘Khao Tom Kui’: a Thai-Chinese rendition of piping hot starchy rice porridge with sides that range from braised meat to spicy salad,” explains Perm, who also swears by eating before going to bed.

Poutine is a popular dish in Montreal and the combination of salt, fat and carbs is a good choice for comforting a hangover.

Chips, gravy and curd cheese: If that isn’t music to a pounding head, then nothing is. In Canada, it’s the unofficial national dish of poutine that locals reach for the day after the night before.

While the classic version is a dependable hangover helper, there are dozens of ways to execute poutine, a Montreal favorite.

With additions such as bacon, pulled pork and duck carnitas, it’s sort of a “go big or go home” situation.

“Lorne sausage — also known as square sausage — is regarded as a national institution and a hangover miracle by most Scots I know,” says Simon Attridge, executive chef of Gleneagles, a luxury hotel set in the Scottish Highlands.

These square-shaped thick slabs of rich, fatty and flavorful beef sausage fit on a roll like a glove. The roll of choice is important to discerning hungover gourmands. Most opt for a special light and airy roll, called a morning roll, sold by the half dozen in every local store across Edinburgh and beyond.

“Its legendary status is, of course, not attributed to any nutritional value,” explains Attridge, “but to its utter deliciousness and restorative qualities. Washed down with a can of Irn Bru [a Scottish carbonated drink], this national delicacy is the stuff of hangover dreams!”

Dublin has an infamous pub culture, so it’s no surprise Ireland has devised a day-after breakfast remedy.

“Dublin hangovers can be brutal,” confesses Dublin native and award-winning oyster chef Simon Lamont. He is fond of one of his home country’s favorite cures: the breakfast blaa.

A bread conceived in the city of Waterford but embraced in the capital in recent years, the greasy meat and carb option involves a generously buttered, soft floury bread roll — or blaa — filled with bacon, sausage and black pudding.

“Brown sauce [traditional British condiment similar to ketchup] is the condiment of choice. And wash it down with a rock shandy [lemonade, sparkling water and bitters] or a pint of stout,” advises Lamont, who adds that “if that doesn’t work, a tray of freshly shucked oysters, obviously!”

The bodega bacon, egg and cheese is a solid NYC breakfast any day of the week but is especially delicious the morning after a big night out.

A bacon, egg and cheese (BEC) is never a bad idea, but you know when it’s a brilliant idea? When you’re struggling with a brutal hangover but don’t have the option of staying in bed with Hulu and sleeping it off. Maybe you have matinee theater tickets or an important meeting.

Whatever it is, rest assured, there’s a nearby corner bodega ready to fry up an egg or two, top it with cheese (American, obviously) and greasy bacon before putting the whole thing on a fresh white roll or English muffin. Butter is essential. Salt and pepper are part of the territory, and ketchup is optional.

Oh, and no matter what time it is — 8 a.m.? noon? — it’s perfectly acceptable to ditch your usual regular coffee for an ice-cold can of real Coke.