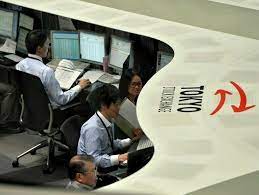 TOKYO (AFP): Tokyo shares ended higher on Tuesday, trading in a narrow range as the market lacked fresh clues during the winter holidays.

The plan means the return of Chinese tourists and the business they bring to cities across the world.

“Global equities climbed Tuesday while the dollar declined amid positive sentiment from China upping the speed limits on zero-Covid off-ramps and the softening of a key inflation measure in the US,” Stephen Innes of SPI Asset Management wrote in a note.
Japan will require Covid-19 tests on arrival for travellers from mainland China from Friday, Prime Minister Fumio Kishida said Tuesday.
China is also seeing an unprecedented surge in infections after abruptly lifting restrictions following nationwide protests.
In Tokyo trading, shares linked to tourists from China advanced.