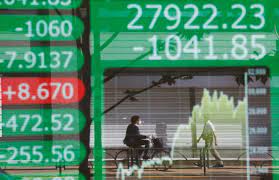 TOKYO (AFP): Tokyo shares closed lower for the fifth straight day on Wednesday, as a higher yen triggered by a surprise Bank of Japan policy tweak weighed on the market.

The dollar fetched 132.08 yen, against 131.69 yen in New York, where the greenback slid further after it dropped from a daily high of 137 yen to 133 yen within minutes of Tuesday’s BoJ decision in Tokyo.

“It would be safe to assume that the BoJ shift will likely fuel further yen strength on repatriation flows as local bond yields rise,” Stephen Innes of SPI Asset Management said in a note.

“Effectively the BoJ pivot is the equivalent of quantitative tightening, which should lead real long-term rates to increase.”
Wall Street stocks mostly ended higher, recovering from a four-day slump as investors tried to look past market uncertainty and fears of a slowdown.

That came despite the Japanese central bank’s policy shift, which “stunned markets” and “sent the dollar tumbling, which gave all risky assets a little jingle”, OANDA’s Edward Moya said in a note.

“No one was expecting this to happen before Governor (Haruhiko) Kuroda’s term ends in April,” he said.

After a two-day policy meeting, the bank said Tuesday it would widen the band in which it would allow rates for 10-year Japan government bonds to move, saying it would “improve market functioning”.