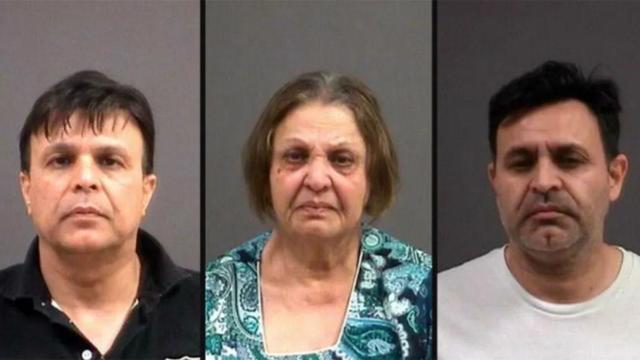 Three Virginia family members were sentenced Tuesday for compelling another family member into what one prosecutor once described as “the modern-day equivalent of slavery” for over a decade.

Zahida Aman, 80, and her two sons, Mohammed Naumman Chaudhri, 54, and Mohammed Rehan Chaudhri, 48, were convicted in May of conspiracy to commit forced labor.

The court has also ordered the family to pay the victim $250,000 in restitution for back wages and other financial losses she incurred during her 12 years in forced labor.

Prosecutors say Aman arranged for one of her sons’ marriage to the victim in 2002. The family kept the woman in their Virginia home to serve the extended family even after the victim’s husband moved out.

Prosecutors say the family “callously exploited the victim’s vulnerabilities and brutally coerced her labor through physical violence and emotional abuse.”

The family compelled the woman to serve them as a domestic servant by using physical and verbal abuse and restricting her communication with her family in Pakistan, according to evidence presented in court.

The family confiscated her immigration documentation and money and threatened to separate her from her children by deporting her to Pakistan, the evidence says. On at least one occasion, the family hog-tied the woman’s hands and feet and dragged her down the stairs in front of her children, according to the evidence.

The woman was reportedly forced to work every day, beginning early each morning. Her food was restricted, and she was forbidden from learning to drive, speaking with anyone but the family members, and could not call her family in Pakistan.

At their conviction in May 2022, U.S. Attorney Jessica D. Alber for the Eastern District of Virginia likened the woman’s forced-labor situation to the “modern-day equivalent of slavery.”

“The defendants exploited someone who should have been a loved family member to force her to work in their home for [more than a decade],” she said. “We will stop at nothing to prosecute those that commit these or similar crimes.”