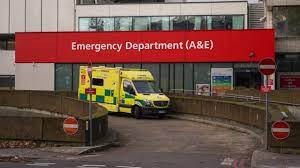 LONDON (Reuters): National Health Service nurses in Britain will strike on Thursday in their first ever national walkout, as a bitter dispute with the government over pay ramps up pressure on already-stretched hospitals at one of the busiest times of year.

An estimated 100,000 nurses will strike at 76 hospitals and health centres on Thursday, cancelling thousands of non-urgent operations, such as hip replacements, and tens of thousands of outpatient appointments in Britain’s state-funded NHS.

Britain is facing a wave of industrial action this winter, with strikes crippling the rail network and postal service, and airports bracing for disruption over Christmas.

Inflation running at more than 10%, trailed by pay offers of around 4%, is stoking tensions between unions and employers.

Of all the strikes though, it will be the sight of nurses on picket lines that will be the stand-out image for many Britons this winter.

“It is deeply regrettable some union members are going ahead with strike action,” health minister Steve Barclay said.

“I’ve been working across government and with medics outside the public sector to ensure safe staffing levels – but I do remain concerned about the risk that strikes pose to patients.”

The widely admired nursing profession will shut down parts of the NHS, which since its founding in 1948 has developed national treasure status for being free at the point of use, hitting healthcare provision when it is already stretched in winter and with backlogs at record levels due to COVID delays.

Barclay said patients should continue to seek urgent medical care and attend appointments unless they have been told not to.

The industrial action by nurses on Dec. 15 and Dec. 20 is unprecedented in the British nursing union’s 106-year history, but the Royal College of Nursing (RCN) says it has no choice as workers struggle to make ends meet.

Nurses want a 19% pay rise, arguing they have suffered a decade of real-terms cuts and that low pay means staff shortages and unsafe care for patients. The government has refused to discuss pay.

The government in Scotland avoided a nursing strike by holding talks on pay, an outcome which the RCN had hoped for in England, Wales and Northern Ireland, but Barclay is not budging.

The government has said it cannot afford to pay more than the 4-5% offered to nurses, which was recommended by an independent body, and that further pay increases would mean taking money away from frontline services.

The RCN has accused the government of “belligerence”. It said as late as Tuesday that the strikes could still be stopped if the government was prepared to negotiate.

Some treatment areas will be exempt from strike action the RCN has said, including chemotherapy, dialysis and intensive care.

Polling ahead of the nursing strike showed that a majority of Britons support the action, but once the walk-outs are underway politicians will be closely monitoring public opinion.