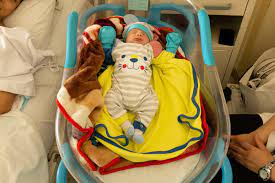 BERLIN (AFP): When Debora Zilz rushed her baby son Andreas to a Berlin hospital because of a serious respiratory illness, she got a shock.

“There was no space,” she recalled. Medics desperately rang other hospitals in the German capital and neighbouring Brandenburg state in an effort to find a bed for the 13-day-old.

“Finally, after a night in the accident and emergency department, we were able to stay here,” said the 33-year-old mother.

Her son, whose weight at one point dropped to below his birth weight of 3.1 kilos (6.8 pounds) before recovering, is now in intensive care.

The baby is battling bronchiolitis, as Germany faces a winter wave of cases of the chest infection in infants, putting already strained hospitals under extra pressure.

After two years of the coronavirus pandemic which brought measures like face mask-wearing that shielded the country’s youngest from exposure to respiratory viruses, several European countries are seeing a surge in bronchiolitis.

The situation is particularly bad in 2022 as newborns and infants are exposed to the respiratory syncytial virus (RSV), which commonly causes bronchiolitis, for the first time.

The paediatric care team at Saint Joseph’s in Berlin, where the youngster was being treated, is struggling to handle the surge with a smaller number of staff than ever before.

“We are underwater,” Beatrix Schmidt, head of the hospital’s paediatric and neonatology department, told AFP.

A perfect storm of factors have contributed to the problem, Schmidt said — “an incredible number of sick children, infected caregivers, and all that at the same time as chronic staff shortages”.

In the down-at-heel neighbourhood of Tempelhof, close to central Berlin, Saint Joseph’s normally has 80 beds for sick children. But due to staff shortages, only 51 can currently be used.

Even in the intensive care unit, beds have had to be closed — and all 18 that remain are occupied.

As in Andreas’s case, medics are frequently finding they have no space for new patients and have to call around to other hospitals.

Many sick children have even had to be transported by helicopter to regions further afield, such as the northeastern state of Mecklenburg-West Pomerania, and the coastal state of Lower Saxony.

According to figures from the Robert Koch health institute, 9.5 million people in Germany were last week affected by some sort of respiratory illness, across all age groups, in a country of 84 million.

The figure is well above that during the same period in 2021, and is higher than at the peak of the 2017-18 flu epidemic.

Schmidt believes many problems are caused by cost-cutting.

“For years, we have made savings when it comes to our health system. And children are the first to pay the price,” said the 63-year-old.

Currently there are 18,000 hospital beds for children in Germany, down from 25,000 in 1995, according to the federal statistics agency.

Germany, with an ageing population and fewer children than even many of its European neighbours, has been investing little in paediatric care, according to Schmidt.

“Many paediatricians are going to retire in the coming years,” said Schmidt, who is herself preparing to leave her position.

The younger generation want to combine work and family, a challenge in a profession that often requires long and unpredictable hours, she said.

And in an affluent country like Germany, salaries of caregivers often leave a lot to be desired.

“In my opinion, they are underpaid,” said Schmidt. “They work a lot — at nights, on weekends.