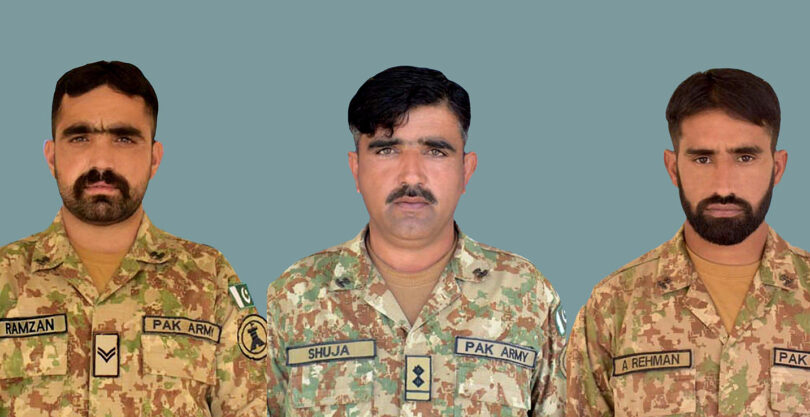 RAWALPINDI (APP): Three soldiers of Pakistan Army were martyred and two terrorists killed in an intense exchange of fire in general area Arawali, Kurram district, on Thursday.
The killed militants remained actively involved in terrorist activities against security forces, the Inter-Services Public Relations (ISPR) said.
The army troops fought bravely and effectively engaged the terrorists, and recovered weapons and ammunition after killing them. The martyred soldiers included Subedar Shuja Muhammad (43), resident of Khairpur; Naik Muhammad Ramzan (32), resident of Khuzdar; and Sepoy Abdul Rehman (30), resident of Sukkur.
The sanitization of the area was being carried out to kill terrorists, if any found in the area, ISPR said. The Pakistan Army, it added, was determined to eliminate the menace of terrorism and such sacrifices of its brave soldiers further strengthened its resolve.
President, PM laud Pakistan Army’s valor for anti-terror action in Kurram District: President Dr Arif Alvi and Prime Minister Shehbaz Sharif on Thursday lauded the Pakistan Army for action against terrorists in the Kurram District of Khyber Pakhtunkhwa.
They paid tribute to the sacrifices of martyred soldiers, including Subedar Shuja Muhammad, Naik Muhammad Ramzan and Sepoy Abdul Rehman.
“We will continue to move forward against terrorism with a firm resolve and steadfastness. Those challenging the security of Pakistan would nowhere find any haven,” the prime minister remarked.
The president resolved that the efforts of the security forces as well as the whole nation would continue till elimination of the scourge from the homeland. He said the prayers of the whole nation went to their brave security forces.
Both the president and the prime minister sympathised with bereaved families of the martyred soldiers and prayed for high ranks of the martyrs in the paradise and for patience to the grieved families to bear the loss.