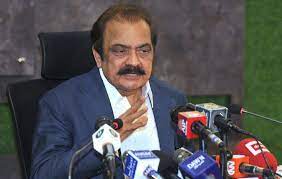 ISLAMABAD (APP): Minister for Interior Rana Sanaullah Khan on Monday said there was poor law and order situation in Khyber Pakhtunkhwa (KP) as some 300 terrorist incidents had occurred in the province in a year, which was alarming.
The minister, in a statement, said the report of the national agencies about the performance of the Counter Terrorism Department (CTD) of KP was an eye-opener, but the Pakistan Tehreek-e-Insaf’s (PTI) government there had done nothing in that regard.
Instead of strengthening the CTD, they made swaths of people with guns attack the Federation, he added. The Federal Government had offered to help build the capacity of KP police and CTD, but received no response from the provincial government till-date, the minister said.
Rana Sana said the PTI claimed that the KP had made progress during its nine-year government, but it had no money for the salaries and pensions of the employees or the martyrs.
He said there was a question mark on the 150 percent difference between the CTD Shuhada (martyrs) packages in Punjab and KP. Likewise, there had been a 70 percent difference between the salaries of CTD Punjab and CTD KP personnel. There was no training school for the CTD KP, he added. He said the KP government had paid no attention to improving the CTD and neither it had raised the issue with the Federal Government during the last nine years.
The appointment of only one officer of SSP (senior superintendent of police) rank in the province, he added, was proof of the incompetence of PTI Chairman Imran Khan and his chief minister. The attitude of Imran and his “company of bribers” on the issue of terrorism was criminal, rather it amounted to helping the terrorists, he said.
Rana Sana alleged that Imran Khan had time “to steal watches”, but had no time to save people from terrorists. He was responsible for ruining KP’s CTD. Instead of fighting the Federation and institutions, he should use that time in fighting terrorism, he added.
He claimed that the PTI’s performance despite being in power for the last nine years was nil. The KP people had to bear the cost of Imran Khan’s incompetence and corruption in the form of terrorism. The PTI leader was busy dissolving assemblies, while the terrorists were killing the innocent people of KP, he added.