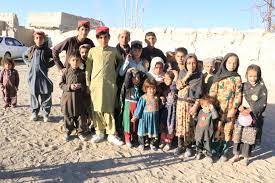 GHAZNI (Pajhwok): About 20,000 children of Mir Khan area in Qarabagh district of central Ghazni province are deprived of education as there is no school for them. There are 35 villages in Mir Khan area where 3500 families reside, but there is not a single school for their children. Neither the previous governments nor the incumbent government paid any attention to the lack of schools in Mir Khan area, while local residents could not afford to build schools on their own for their children to avoid a dark future, the residents said.
Mohammad Hashim, a tribal elder in Mir Khan area, told Pajhwok Afghan News there were 35 villages where 3,500 families resided and they had no school for their 20,000 children. “We tried our best to have school in our area during the past two decades, but due to the wars and insecurity, we failed to do so,” Hashim said. He said during the past two decades thousands of children grew up illiterate and thousands of other children faced the same fate right now.
“Education is the right of children, officials and elders must fulfill their responsibility towards the boys and girls of this area,” Hashim added. Abdul Habib, another tribal elder, told Pajhwok that local people had purchased some land for a school but they were not economically sound to build it. “We want the government and other relevant institutions to help us build a school”, Abdul Habib said.
“In the past, the people did not want to educate their children, but now they have realized the importance of education so the officials must fulfill their responsibility in this regard,” he added. Mullah Shafiq, imam of a mosque, said the entire Qarabagh district had been ignored especially Mir Khan area with regard to education. Mullah Shafiq told Pajhwok Afghan News it was responsibly of the government to build schools for children and to provide other facilities.
Even children of this area are united in their demand for education. They say if they are provided the opportunity to get education, they could become doctors, engineers and other professionals in the future. Government officials, on the other hand, say half of the schools across the country face shortage of textbooks and professional teachers.
MawlawiMunirMansoor, Ghazni education director, told Pajhwok: “It is right that Qarabagh district is the most neglected area with regard to education, the main reason is negligence of the past government and wars in this area”. “We will share the demands of Mir Khan residents with the officials concerned to provide them all facilities for education of their children,” Mansoor promised. It is worth mentioning that residents of many other areas of Ghazni province have no access to even to basic services including education.