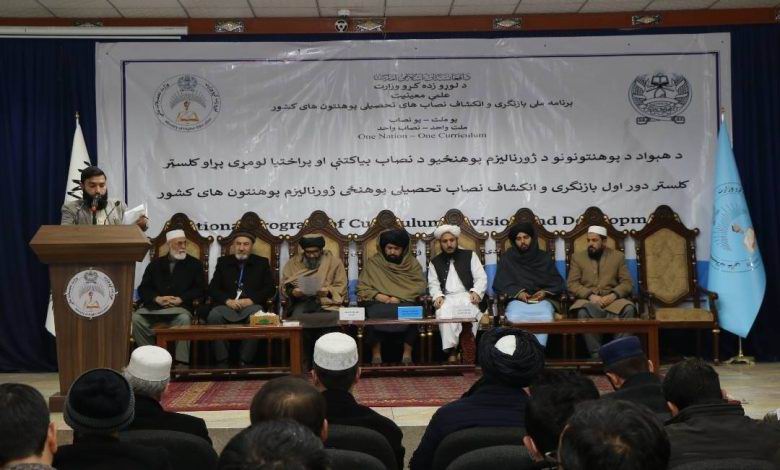 KABUL (Khaama Press): The Ministry of Higher Education of the Islamic Emirate of Afghanistan announced that initial initiatives have been taken to revise the journalism curriculum at the universities in the country.
Mawlavi Neda Mohammad Nadeem, the Acting Minister of Higher Education, in a ceremony said in his opening remarks, that westerners use media as a powerful tool to their own advantage through waging intellectual and propaganda war against Muslims.
The interim administration is planning to significantly revise the journalism curriculum to prepare the young journalists to sever the country with honesty and good faith, not to propagate wrong things against a group, regime, or Islamic values, Minister Nadeem said. “Lying is forbidden in all religions, however, some media have made it their profession and are corrupting people’s minds through propaganda” Minister Nadeem added. He further stressed on the importance of honesty, reliability, and compliance with national and Islamic values in journalism.
Journalism is an important profession in the contemporary environment, it has the potential to change people’s mindset either negatively or positively,” Deputy Minister of Higher Education, Dr. Lutfullah Khairkhah said.
This comes as the Taliban authorities in Afghanistan have imposed wide-ranging restrictions on media and free press since their return to power in August 2021. The set of regulations introduced by the Taliban administration restricts media and journalists to report on matters that are contrary to Islam, insulting national figures, or criticizing the ruling regime. It also adds that media outlets should maintain balance by not providing reports on matters that could negatively influence the attitude of the general public. The complete censorship of media has paralyzed the local and international media outlets to reflect the reality of the status quo in the country.
So far, the Taliban authorities have arbitrarily detained, tortured and harassed several journalists and media personnel including foreign nationals across the country. Meanwhile, the IEA officials have made it very clear that they don’t want to face public scrutiny under no circumstances.