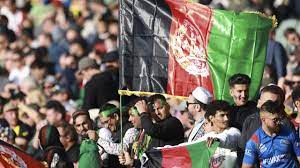 KABUL (Al Jazeera): “Cricket! The only hope for the country. Keep politics out of it,” tweeted Afghanistan’s most famous cricketer Rashid Khan after Australia withdrew from One-Day International (ODI) series against the south Asian nation scheduled to be held in March.
Khan, the face of Afghan cricket and the captain of the country’s T20 team, was not alone. Soon a chorus of condemnation followed, including from fellow cricketers, expressing their disapproval of Australia’s decision to boycott the Afghan men’s team.
“I am really disappointed to hear that Australia have pulled out of the series to play us in March. I take great pride in representing my country and we have made great progress on the world stage,” Khan said in a statement on Thursday.
“This decision from CA [Cricket Australia] sets us back in that journey,” he said.
Mohammad Nabi, the Afghan cricket team’s former captain, also condemned the cancellation of the series to be played in Dubai.
“Let’s separate sports and politics,” he said, adding that Afghan cricketers are role models and proud ambassadors of the cricketing fraternity.
‘Pathetic’ decision
Afghan fast bowler Naveen ul Haq Murid called scrapping the series “childish” and accused Australia of taking away Afghans’ only reason for happiness instead of being supportive. Afghans used #StopPoliticsinCricket to express their views, with some of them welcoming the Australian decision.
Australia cricket board said its decision was taken in the wake of the recent Taliban announcement to further curb women’s freedom. Last month, Taliban rulers banned women from university and also barred them from working in NGOs. Women are also banned from attending school beyond the sixth grade and working most jobs outside of their homes.
The Australian government has backed the board’s decision.
The Taliban have so far not issued a statement, but former President Hamid Karzai expressed his disappointment.
“Disappointed to see the Australian Cricket board making this decision [e]specially given the challenges the Afghan people face. We remain incredibly proud of our National Cricket team and all our young sports representatives,” he tweeted.
Cricket has widespread support in a nation racked by decades of war and occupation. People, including cricketers, highlighted that the sport has brought smiles to Afghan faces amid violence and upheaval. The Taliban returned to power in August 2021, when the US-led foreign forces withdrew from the country after 20 years.
Australia gave similar reasons for cancelling a one-off test match against Afghanistan in Hobart, Australia, in November 2021.
The Afghanistan Cricket Board said it was saddened by “the pathetic” decision by Cricket Australia. It pledged to approach the International Cricket Council – the sport’s highest governing body. The ICC has yet to comment on the issue.
It accused Cricket Australia of prioritising political interests over fair play and sportsmanship, undermining the integrity of the game.
“Cricket has played a significant role in promoting unity and national pride in Afghanistan,” the board said.
“After years of war and conflict, cricket has helped to bring people together and provide a sense of normalcy to the country. It has also been an important source of hope and inspiration for all Afghans, particularly young people.”
Khan, the Afghan cricketer, also threatened to pull out of Australia’s Big Bash T20 League. Khan plays for the Adelaide Strikers franchise.
“If playing vs Afghanistan is so uncomfortable for Australia then I wouldn’t want to make anyone uncomfortable with my presence in the BBL. Therefore, I will be strongly considering my future in that competition.”
Australia on Friday defended their decision to pull out of a cricket series against Afghanistan.
“Basic human rights is not politics,” Cricket Australia chief executive Nick Hockley said in a statement sent to AFP.
“It is clearly a very challenging and sad situation. We did not take this decision lightly,” Hockley said.
Cricket Australia had been hopeful of playing Afghanistan and was in regular contact with the Afghanistan Cricket Board, he added.
“However, announcements by the Taliban in late November and late December signalling the deterioration of basic human rights for women in Afghanistan led to our decision to withdraw from these games,” he said.
“We acknowledge and applaud Rashid Khan’s and other Afghanistan cricketers’ comments at the time condemning the Taliban’s decision to ban women from universities. Rashid will always be welcome in the BBL,” Hockley said, referring to Afghan cricketers’ public stand for women’s rights.
Australia was committed to growing the game for women and men, the cricket chief said, adding that he hoped better conditions for women and girls in Afghanistan would allow cricket between the countries to resume “in the not-too-distant future”.
But one of the women involved in the development of women’s cricket in Afghanistan told an Australian website, SBS News, the boycott could lead to more countries cancelling matches. If that happens, Tuba Sangar, Afghanistan’s former women’s cricket development manager, said, Afghanistan could lose its membership in the ICC.
Sangar told SBS News that Afghanistan did not get “the full membership [of the ICC] easily”.
Questioning the Australian board’s decision, Ben Gardner, managing editor of wisden.com, wrote that Australia played Afghanistan in T20 World Cup last year despite the Taliban ban on women’s cricket in September.
He pointed out that Afghanistan was granted ICC full membership in 2017 despite the country not having a women’s team.
“What this [boycott] does do is deprive Afghanistan’s cricketers of the platform from which they can speak out. Their cricket team is their greatest cultural export…,” Gardner wrote in the article.