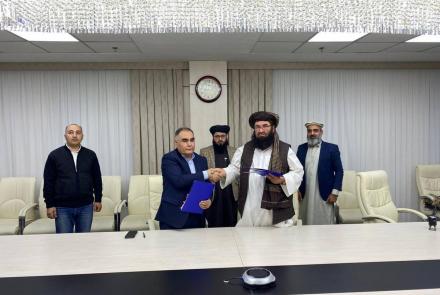 KABUL (Tolonews): The Ministry of Energy and Water has signed an agreement with Uzbekistan to extend the import of electricity to Afghanistan for another year, hoping to end power cuts in the capital city, Kabul.

Abdul Latif Mansour, the acting minister of energy and water, who traveled to Uzbekistan this week, said the lack of electricity in Kabul and some other provinces is due to technical issues in power plants in Uzbekistan.

“We signed and extended the agreement for the import of electricity in 2023,” said Mansour said.

He called on people to pay attention to saving electricity.

“Turning on additional lights and using heaters can put pressure on electricity. It is better if there are energy conservation measures,” said the acting minister of Water and Energy

Residents of Kabul and other provinces said they are facing major power blackouts in the last two months, adding that the problem needs to be solved.

“Power outages are at the level that electricity is supplied for us for two hours a day,” said Hamid Qasim, a Kabul resident.

“Power is necessary for the people and for factories. Factories will stop if there is no electricity for them,” said Mujtaba, a Kabul resident.

Uzbekistan will provide 450 megawatts of electricity to Afghanistan during winter.

According to the country’s power distributor, Da Afghanistan Breshna Sherkat, the pact for Uzbekistan’s imported electricity signed in 2022 included the import of 2 billion kilowatts of power for $100 million.