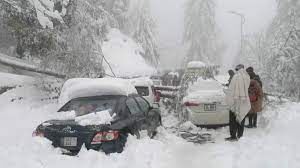 MURREE: Alert for tourists has been sounded as the hill station of Murree braced for winter’s first snowfall.

The Met Office on Tuesday forecast that Murree may receive season’s first snowfall on Thursday (December 29).

The weather office also advised the tourists to be careful while travelling to the hill station.

The weather advisory came nearly a year after a deadly snowfall in January 2022 which had claimed lives of 23 tourists in Murree.

Most of the victims had died of hypothermia as more than 4 feet (122cm) of snow fell in the area of the Murree Hills resort during one night, trapping thousands of cars on roadways.

The snow was so severe that heavy equipment brought in to clear it initially got stuck during the night when temperatures fell to minus 8 degrees Celsius (17.6 degrees Fahrenheit). Officials had called in paramilitary troops and a special military mountain unit to help.