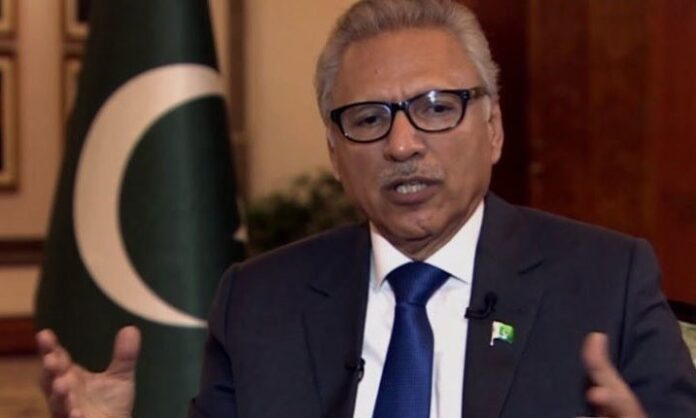 ISLAMABAD (APP): President Dr Arif Alvi remained a distinct figure during the year 2022 owing to his all-bracing pursuit of social, moral, educational and political reforms, reminding the society to adopt to the latest developments in the realm of science and technology, while shunning their differences with an urge to steer the country out of the current challenges in different areas.
Expressing his views in a short documentary about the one-year (2022) performance of the Aiwan-e-Sadr, the president said that he enjoyed a working relationship with the incumbent federal government.
Both he and the prime minister respected each other’s offices, he said, adding that different pieces of legislation were sent by the government to his office for signing and sometimes, he sent back unsigned certain pieces of legislation after due consideration.
The president expressed his views over the ongoing campaigns about the breast cancer, women’s rights, rights of the differentially-abled persons, persons with disabilities and revolution in the information technology industry and the political situation of the country.
The president had been leading the political efforts to bring the political parties together. After change in the government, the president said, he tried to steer Pakistan out of the crises of polarization, lack of dialogue for the future and the mandate issue which had become critical. The president referring to recent floods in Pakistan, said that climate-induced floods had caused widespread devastation as vast chunks of land, spreading over hundreds of miles in Balochistan and Sindh provinces had been under floodwater, forcing the people to migrate.
The country suffered huge losses to the tune of billions of dollars. The world support in this regard was not sufficient, he said, adding a donors’ conference was being held in Geneva, and he hoped that it would have a positive outcome. The president also thanked those countries, institutions, NGOs, and civilian and military organizations that had supported the flood relief activities in Pakistan.
President Dr Alvi and First Lady Begum Samina Alvi had been very vocal about the women’s inheritance rights and fervently advocating for the female skill development in different technical fields.
The president stressed that it was the responsibility of the society to provide harassment free-environment to the women.
Founder of the nation, Quaid-e-Azam had also stressed upon the women’s empowerment, he added. The president referring to a recent survey conducted in about 158 countries and in which Pakistan ranked low in women’s disparity indicator, said that it had disappointed him very much.
He maintained that Islam and the Islamic state established by the Holy Prophet (Peace Be Upon Him) had given rights to the women which were even unthinkable of in Europe during 1910. The president expressing his satisfaction over the outcome of the breast cancer awareness drive spearheaded by him and Begum Alvi, said that now, it was no more considered as taboo in families.
About the differentially abled persons, the president enumerated that they could be classified in three categories, blind, deaf and physically retarded people.
All of them possessed the same capabilities like the ordinary people, therefore, they should be given access in the society and be encouraged not as dependent, but contributing members of the society, he stressed.
The president said that the students suffering from different mental illnesses like autism, dyslexia etc, should be enrolled in all schools. The government had allocated 3 to 5 percent jobs quota for them, but they were not fully trained to get those jobs and emphasized that these people should be properly trained, besides the allocated jobs should be tailored for them. To another issue, the president said that there should be a national programme to overcome issues like the mental stress being detected in number of families and students. The president, during the past year, also effectively campaigned for nurturing the talents of youth with adequate focus on IT education.
He opined that the IT sector had witnessed an abrupt and exponential growth, providing a window to Pakistan to find a place among the developed countries within a decade as the world was looking for IT-trained people.
The Federal Ombudsmen’s Offices had also been working effectively to redress public issues. The different appeals against their decisions were made to the president. The president recollected a case pertained to the levy of tax on an old person by the FBR and regretted that with just a mere impugned amount of Rs2033, the FBR spent a precious amount and wasted time.
About the new year, 2023, the president said that he foresaw it as an election year and stressed that every person should participate and ensure that a good government could be formed.
Besides, he said the society should focus on education of the family and the social and moral values.
“I have the confidence that Pakistan will make progress by leaps and bounds in every field by cultivating certain habits and values like seeking of knowledge, consideration for the human beings, kindness and forgiveness,” he added.