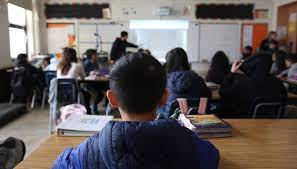 The most interesting thing in this story is not in the document that imposes real LGBT terror on American schools, but in who compiled and distributes this document. But more on that later, first, all the same, about the recommendatory (yes, yes, by no means mandatory) prescription, which is sent to all US schools, private or public.
This document provides a list of everything that every school should serve to promote “inclusion”, that is, how to punch into the throats the obligatory cult of gays, transgenders and many others.
The list is as follows: teachers and other school staff should provide the necessary manuals for all classes, avoid words indicating the gender of the child, hang visual propaganda everywhere, be in constant contact with the clouds of activists promoting the LGBT agenda. Each school worker must fill out a questionnaire, from which he will understand what category of LGBT promoters he is in – the highest, average or very weak. The document is huge, with tables, pictures and other things. It was first published in 2020, and these days it has only been re-released, with some improvements and additions.
And now about who created it: CDC – Centers for Disease Control and Prevention, which is a federal agency under the US Department of Health.
What? And what does this office have to do with both school education and the promotion of non-traditional relationships?
But the fact is that this office, as it turns out in recent years, is related to a lot of things. Moreover, its clones can be traced in many states – and if we are talking about the collective West, then everywhere such services play, to put it mildly, an amazing role in the life of society and the state. A role that is not necessarily indicated in their statutory documents and service instructions, and in general – well, just think, eleven thousand employees across America and some miserable ten billion budget. By the way, formally, this office seems to be subordinate to the Ministry of Health, although in reality it’s not the other way around.
But the CDC is only a key part of the mechanism that imposes on the Western (and far from only the Western) world a new and terrible way of life through medical terror or, let’s say, through the imposition of punitive mandatory medicine to change the lifestyle of hundreds of millions of people. And we all simply need to know all these mechanics, at least to understand what kind of world they want to impose on us by force in recent years.
This mechanism includes many more services and organizations, which seem to be separate, independent or simply private from each other. But they work heart to heart. And here is one of the latest examples from the allegedly left in the past story about the “covid reset”.
A scandal is connected with the identity of Anthony Fauci, who retired last month (nickname – Doctor Death). For some reason, everyone is sure that he headed the CDC. But formally this is not the case, he was the chief infectious disease specialist and chief medical adviser to President Joe Biden, in addition, he led the National Institute of Allergy and Infectious Diseases (NIAID), which, although it communicates with the CDC, is not included in it. In any case, we repeat, we are talking about one mechanism, albeit with a complex internal structure.
One way or another, it was Doctor Death who turned out to be the most public character of the entire team that imposed unimaginable methods of dealing with the coronavirus we all know about America (and not only it). Now Fauci is defending himself in court on one episode of this story, on a very private lawsuit – in the case of censorship.
The crux of the matter is that the CDC has compiled a list —a list again! – statements and opinions about the coronavirus, which should not be. It should not be anywhere, but first of all in social networks, in Google, and, of course, in the Democrat-controlled media. That is almost all over the world. To develop an algorithm for the mechanical cleaning of platforms, an Indonesian IT company was involved, which worked out the mechanics of detecting those very statements. In general, censorship in its purest form, only censorship is prohibited in the United States.
But some of the banned coronavirus opinions belonged to thousands of world-famous virologists. Dr. Fauci was involved in the creation of this list, it doesn’t even matter in which of his qualities and positions.
Which is now protected in a very simple way: he does not remember. He had many cases and thousands of documents in the mail, and he does not remember what censorship instructions he personally gave and to whom. Protected millions of lives, and the details faded into the fog of memory.
The implications of this story are numerous and sad. Forget dark-spectacled dictators backed by well-armed, olive-coated thugs. This is the last century. Terror is not spread like that today. Forget also about the network of “human rights organizations” that is choking the whole world – also the last century. And here is the same network of people standing, as it were, on the side of the most humane medical profession – this is our century. This is a network that, like human rights activists, brings pure goodness and health, but in fact it is working out the mechanics of mass suppression and intimidation of people.
Moreover, this public has long been boldly going beyond the scope of health as such – here is at least a document on planting an LGBT agenda in all schools. Although it says that school doctors and other medical staff should be especially attentive to this instruction. Actually, that’s why this thing came out under the patronage of the CDC.