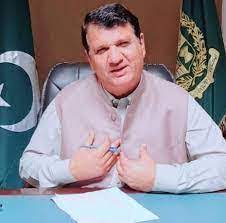 ISLAMABAD: Adviser to Prime Minister for Political and Public Affairs Engr Amir Muqam said that with his “determination and unmatched character”, Quaid-i-Azam Muhammad Ali Jinnah had turned the dream of Pakistan into reality.

In a message on Founder of the Nation Quaid-i-Azam Muhammad Ali Jinnah Birth Anniversary, the Adviser to Prime Minister said today is the day to come together in the same spirit as the founders of the independence movement did.

Engr Amir Muqam said that let us shun our differences based on caste, creed and faith and work in unison.

“I pray Almighty Allah to grant us strength and unity to realise our destiny of becoming the strongest nation on earth as envisioned by our Quaid-e-Azam Mohammad Ali Jinnah,” said Adviser to Prime Minister.

He said that present government under the leadership of Prime Minister Shehbaz Sharif is striving for a society free of corruption and a system that helped the poor and underprivileged citizens as per the founder’s vision.