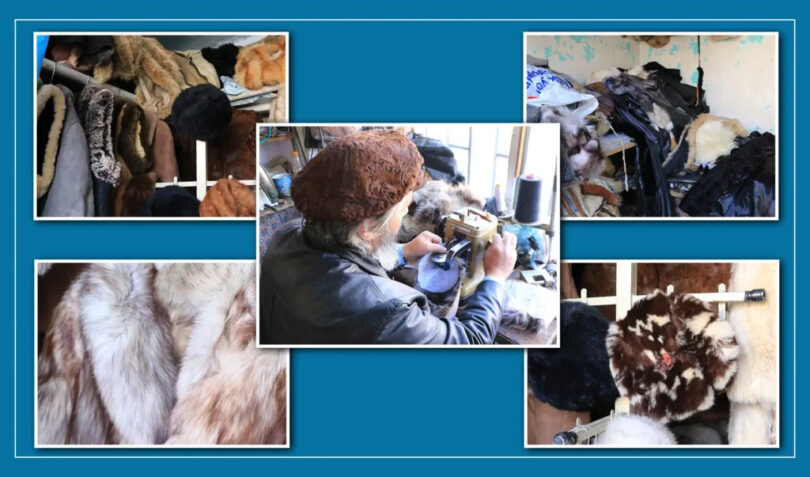 KABUL (Pajhwok): A number of individuals associated with coats making from animals skins have said their business was facing market stagnation and asked the government to explore new markets for their products.
Animals skin made garments has long history in Afghanistan, people used to make different types of coats and other products from animal skins that had local and foreign buyers but currently its market had declined. Individuals associated with this business have complained against decline in their business and said with the decline in the number of tourist their business had suffered and their clients had declined.
Sania Mohammadi, the owner of Sania Mohammadi Animals Skin Industry, during an exclusive interview told Pajhwok Afghan News that he spent two decades of his life making wearing products from animals skin.
Hailing from Taimani area, Mohammadi sell his product such as coats, jackets, cloves, overcoat and handkerchief in his shop in Shah-i-Naw.
He complained against the decline sale and said: “In the past the animals skin made products had good market in the country, local and foreign tourist wanted to buy these products, but currently their business is facing decline.”
Referring to the decline in their products sale compared to the past he said currently their products were only sold in exhibitions, but that too is very limited, he added: “A few days ago, an exhibition was launched in which I sold only 6 caps and some men’s vests. The source stated that due to the decrease in sales and the lack of raw materials (animal skins), their production has also decreased.
In the past, there were enough raw materials because animals such as foxes, deer and others were hunted, but hunting of animals has been prohibited for several years, and for this reason, they are facing a shortage of raw materials.
He wants the government to explore market their products so that the business of animals skin made products in the country does not face stagnation. Haji Waheed, the owner of Abdul Basit Handicraft shop, in Shahr-i-Naw also complained against the decline in their sale. He is associated with this business over the past several years said currently 15 individuals, including men and women, have been working with them while in the past over 50 people were working with him.
“Our sale is down by 90 percent and like me all businessperson have no sale,” he said.
He added in the past we made 100 coats in a month and sold them but currently they have no sale and over the past few months they have no sale.
He also asked the government to explore market for their products.
Mohammad Asif, the owner of another shop in Taimani area, said in the past they sold few animals skin made coats but currently they could only sale their products in the exhibitions. He asked the Islamic Emirate of Afghanistan to ensure their industry will not collapse and urged the government to organize more exhibitions to promote the sale of their products. Akhunzada Abdul salaam Jawad, spokesperson for the Ministry of Commerce and Industry, said several exhibitions had been organized inside and outside the country to promote the business of animals skin made products.
He said the IEA fully supported them and efforts are being made to do more marketing for the sale of their products.
“We can make it easier for them to participate in exhibitions, and if an exhibition is held abroad, we will make it easier for them to participate and obtain visas and transfer their goods,” he said.