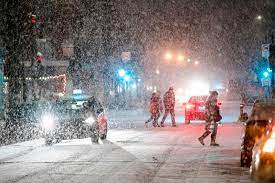 WASHINGTON (Reuters): Arctic cold extended its grip over much of the United States on Friday, combining with snow, ice and howling winds from a deadly winter storm roaring out of the Midwest to disrupt energy supplies and thwart travel for millions of Americans ahead of the holiday weekend.

The extreme winter weather, which prompted city authorities across the country to open warming centres in libraries and police stations while scrambling to expand temporary shelter for the homeless, was blamed for at least five deaths on Friday.

A 50-vehicle pileup on the Ohio Turnpike in a blizzard near Toledo killed two motorists, injured numerous others and shut down both lanes of the highway, state police reported.

Stranded motorists were evacuated by bus to keep them from freezing in their cars in sub-zero temperatures, according to the Toledo Fire & Rescue Department.

Three weather-related fatalities were confirmed in neighbouring Kentucky – two from car accidents and one a homeless person who died of exposure.

With the deep freeze stretching from Montana to Texas as it crept eastward, some 240 million people – more than two-thirds of the US population – were under winter weather warnings and advisories on Friday, the National Weather Service (NWS) said.

The map of existing or impending wintry hazards “depicts one of the greatest extents of winter weather warnings and advisories ever,” the NWS said.

The nation’s coldest spot on Friday was the remote northern Montana town of Havre near the Canadian border, where the mercury had risen from a low of 38 degrees below zero Fahrenheit (minus 39 C) to minus 20 just before noon, the NWS reported.

“It’s been colder, but yeah, I guess it’s cold out,” Tyler Schaub, the manager of Rod’s Drive Inn, acknowledged as he was flipping burgers on the grill. “We’re used to it, but even then it’s best not to stay outside too long.”

Numbing cold intensified by high winds extended through the Deep South to the US-Mexico border, plunging wind chill factors to single digits Fahrenheit (minus 18 to minus 13 Celsius) in the border city of El Paso, Texas. Exposure to such conditions can cause frostbite within minutes.

Hard-freeze warnings were posted in southern Georgia and across much of all four Gulf Coast states – Texas, Louisiana, Alabama and Florida.

Farther north, the storm system produced blinding snow from the northern Plains and Great Lakes region to the upper Mississippi Valley, the Ohio Valley, western New York state and mountains of the northern and central Appalachians.

The extreme weather added to a humanitarian crisis in numerous cities facing an influx of migrants who have crossed the US southern border by the thousands in recent weeks and lack permanent shelter. Their plight has added to local agencies scrambling to get people off the streets as the arctic blast arrived.

The household routines and holiday plans of ordinary Americans were likewise disrupted just days before Christmas.

With the nation’s energy systems strained by rising demand for heat and by storm-related damage to transmission lines, as many as 1.5 million US homes and businesses were left without power on Friday, according to tracking site Poweroutage.us.

Severe winds, ice and snow upended commercial air traffic during one of the busiest travel periods of the year.

More than 5,200 US flights were cancelled on Friday, according to flight-tracking service FlightAware. Nearly 700 flights into or out of Seattle’s major airport were axed as a separate storm system brought ice and freezing rain to the Pacific Northwest.

The American Automobile Association (AAA) had estimated that 112.7 million people planned to travel 50 miles (80 km) or more from home between Friday and January 2. That number was likely to drop due to treacherous weather complicating air and road travel going into the weekend.

The city of Buffalo and its surrounding county on the edge of Lake Erie in western New York imposed a driving ban, and all three Buffalo-area border crossing bridges were closed to inbound traffic from Canada due to the weather.

“If there’s any good news, it’s that the storm has moved quickly over some areas,” US Transportation Secretary Pete Buttigieg told MSNBC on Friday.

Last-minute holiday gift purchases may also have slim chances of reaching their destinations by Christmas.

FedEx, United Parcel Service, the US Postal Service and Amazon.com all alerted customers that severe weather was disrupting key operations in Tennessee, Indiana, Kentucky, Illinois, the Dakotas and other areas hard-hit by bitter cold and blizzards.

Weather forecasters said the massive storm over the Midwest had materialised into a “bomb cyclone” – a phenomenon caused by a drastic, rapid drop in atmospheric pressure that forms a kind of cold-weather hurricane.

While some areas downwind from the Great Lakes received a foot or more of snow on Friday, “the big story wasn’t so much the falling snow but the blowing snow,” weather service meteorologist Brian Hurley said.