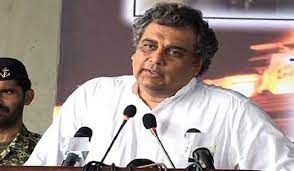 KARACHI (Agencies): An anti-terrorism court on Friday granted bail to Pakistan Tehreek-e-Insaf (PTI) leader Ali Zaidi and directed Police to refrain from apprehending him in the matter.

Ali Zaidi, who was accused of vandalism and rioting in the DRO office at Keamari on the matter of local government election results, appeared before the court and filed a bail application. The ATC accepted PTI’s leader bail application against a surety bond of Rs30,000 and restrained police from arresting him till Jan 28.

PTI’s Bilal Ghaffar, Saeed Afridi and others have already secured bail in the case.

Speaking to the media after approval of the bail application the PTI Sindh president Ali Zaidi said the party was in contact with Hafiz Naeemur Rehman of the Jamaat-e-Islami for the top slots in the local government. “Hafiz Naeemur Rehman is coming to meet us today. Matters will be finalised after the meeting,” he added. Ali Zaidi claimed the Peoples Party was a “Zardari mafia” and there would be no dialogue with it.