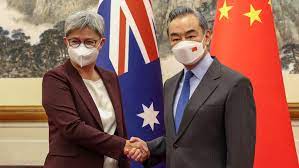 BEIJING (AP): The foreign ministers of Australia and China met in Beijing on Wednesday in a bid to restore high-level political contacts and return stability to a relationship that has undergone major turbulence in recent years.

Penny Wong’s visit comes on the anniversary of 50 years of official diplomatic relations between the nations, a symbolic occasion the sides appear to hope will help maneuver ties back on track.

“We all share an interest in a region that respects sovereignty, that is peaceful, that is stable and is prosperous,” Wong was quoted as saying.

She added that “through a more stable relationship between Australia and China we can help ensure our people, our region and world can enjoy peace and security,” AAP reported.

Wong’s visit has raised hopes of an end to import blocks imposed by China and the possible freeing of two Australian citizens detained in China. Wong said she would continue to advocate for Australians held in China without giving details.

Wong’s trip furthers a tentative thaw in relations between the two nations since Australian Prime Minister Anthony Albanese won an election victory in May, replacing the more conservative Scott Morrison in the top role.

Albanese and Chinese President Xi Jinping met on the sidelines of the Group of 20 summit last month in Bali, the first such formal meeting between the leaders of the two nations in six years.

Relations between Australia and China have been poor since China imposed trade barriers and refused high-level exchanges in response to Australia enacting rules targeting foreign interference in its domestic politics and calling for an independent inquiry into the COVID-19 pandemic.

Albanese has also said he remained committed to building a fleet of submarines powered by U.S. nuclear technology despite the French president describing the plan as a “confrontation with China.”

As a treaty partner with the U.S., Australia is also viewed by China as part of a scheme to prevent it asserting diplomatic and military supremacy over the South China Sea and most of East Asia.

That has prompted many nations, including Australia, to seek a balance between their crucial economic ties with China and their long-standing security relations with the U.S.

Cooperation between China and Australia has “achieved fruitful results, bringing tangible benefits to the people of the two countries,” Xi was quoted as saying.

Healthy ties are “conducive to promoting peace, stability and prosperity of the region and the world,” Xi said, adding that the sides should “adhere to mutual respect (and) win-win principles.”

Australia established diplomatic relations with the Republic of China in 1941, but those were severed following the Communist Party’s overthrow of the Nationalist government in 1949 and not restored until 1972.