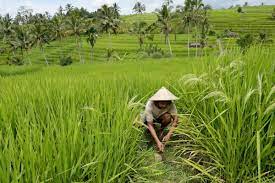 JATILUWIH, Indonesia (AP): Far from Bali’s beaches and hotels, farmer I Ketut Jata stands on a mountainside, staring at terraced land that is too dry to grow the rice his family has long relied on for food and income.

“It is no longer possible to work in the fields as a farmer,” he says.

A tropical, volcanic island in the center of Indonesia’s archipelago, Bali relies on water from three main sources: crater lakes, rivers and shallow groundwater. A unique traditional irrigation system, called the “subak,” distributes water through a network of canals, dams and tunnels.

The subak, made a UNESCO site in 2012, is central to Balinese culture, representing the Balinese Hindu philosophy of “Tri Hita Karana”— harmony between people, nature and the spiritual realm.

“This is one of the very special cases of living landscapes in Asia,” said Feng Jing, who works with UNESCO in Bangkok.

Pressures are severely straining the subak and other water resources, says Putu Bawa, project manager for the Bali Water Protection program, led by a Bali-based nongovernment organization, the IDEP Foundation.

The island’s population jumped more than 70% from 1980 to 2020, to 4.3 million people, according to government census data. Tourism growth has been even more explosive: Less than 140,000 foreign visitors came to the island in 1980. By 2019, there were more than 6.2 million foreign and 10.5 million domestic tourists.

With the tourism boom, Bali’s economy has prospered — at a cost. Rice fields the subak once coursed through have been turned into golf courses and water parks, while forests that naturally collect water and are vital to the subak have been felled for new villas and hotels, Bawa said.

Stroma Cole of the University of Westminster, who has researched tourism’s impact on Bali’s water supplies, says another issue is that the water table is dropping because of Bali’s residents and businesses rely on unregulated wells or boreholes for clean water, instead of government-owned piped supplies.

“At the moment, it is the cheapest source of water for people to use,” Cole said. “So why wouldn’t you use that?”

In less than a decade, Bali’s water table has sunk more than 50 meters (164 feet) in some areas, according to data provided by IDEP. Wells are running dry or have been fouled with salt water, particularly in the island’s south.

Bali does have regulations — such as water licenses and taxes on water used — that are meant to manage the island’s water supplies, but there’s no enforcement, Cole said.

“The rules which exist are excellent rules, but they are not enforced” she said.

Bali’s municipal water agency and Bali’s department of public works did not respond to requests for comment.

The dire impact of the water crisis can be seen in Jatiluwih, in northwestern Bali, where farmers tend to the island’s largest rice terraces.

For generations lush green rice terraces have relied on the subak system for irrigation. But in the past decade, farmers have had to import and pump water through white plastic pipes to irrigate the fields.

Back in central Bali, Jata said he tried planting cloves, which require less water. But the land — which is ideal for rice — and a lack of subak water thwarted that plan.

“In the past, when the subak was active, the water was still good,” Jata said. “But so far there have been no results … all the cloves are dead.”

Other Bali farmers say they can only get one rice harvest instead of two or three a year due to water disruptions, according to Cole’s research. That could reduce food production on the island.

When Indonesia closed its borders at the height of the pandemic, Bali’s tourism dropped drastically. Environmentalists hoped the closure would allow the island’s wells to recharge. IDEP is currently installing sensors in wells across the island to better research monitor water levels.

But development across the island has continued, including a new government-backed toll road that activists say will further disrupt the subak system. New hotels, villas and other businesses are adding to demand.

Tourism is key to Bali but there also should be better enforcement and increased monitoring to protect the island’s water resources, Bawa said. “We need to do this together for the sake of the survival of the island.”