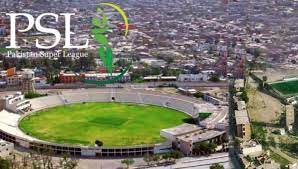 QUETTA: The Balochistan government is trying its best for finalizing arrangements in order to bring the Pakistan Super League (PSL) matches in Quetta as the renovation work of Ayub Stadium had already been underway.

He said the province had the honour to produce international players who brought laurels to the country and the government would create more opportunities and provide facilities to the sportsmen for representing the country.

Balochistan government is currently working on the plan to set up an international-level sports complex in every division of the province with an aim to encourage youth to actively take part in sports, he informed.

The provincial government had been working to allocate special funds for extending sports facilities to bring the youth towards sports and healthy activities in the province.

He added, “If we do not engage our youth in sports and healthy activities then negative elements in the society could destroy our young generation.”

He informed that the government was preparing to organize an event of sports and cultural related activities in connection with the celebration of spring festival adding that would be the first of its kind festival to participate a huge number of youth across the province.

He said we were working to appoint a large number of staff in the sports department of the province to teach and guide the sports man. (APP)